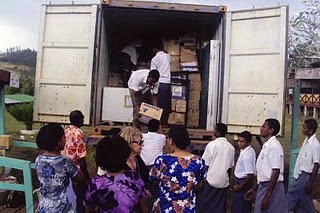 students watching a container being unloaded in Vanua Levu. Now this one did get through!
from w
From February onwards containers sent to Fiji of donated goods have been stalled in Lautoka by Customs wanting duty to be paid on gifts for schools, hospitals, and communities. They were sent from Geelong Donation in Kind where Peceli and I and dozens of friends spent one or two mornings a week packing excellent goods. The list of goods given are always in response to a 'wish list' and not just ad hoc. I emailed the Fiji PM about it but received no reply.

Anyway another person has tried the same, disillusioned because their container of gifts are stuck at the wharf. Well, they went to the Fiji media who picked up the story so we'll wait and see what happens next.

It seems like the policy has changed and they don't want anymore second-hand goods, even in excellent condition. We have been informed that there are now new rules that require a specific 'wish list' from the intended recipient of donated goods that has to be screened by someone from the Fiji government even before the donors in Australia or New Zealand even start packing! How long would that take I wonder?

Or, are they just trying to make some money out of the donated goods? These are the kind of items that now are problematic - even when gifts for schools etc and certainly not for re-sale.
ZHere is a list of items detained from one shipment.
- computers
- metal cabinets & shelving’s
- television sets
- Student chairs &desks.
- sewing machines
- scanners
- books & children’s clothing
- house hold items
- Medical supplies.

It costs about $6000F to send a container from Geelong to Fiji, then the wharf fees in Suva or Lautoka are added and transport to the schools etc. may be paid for by Australians or by the recipient. If there's a problem in customs then there may be extra charges for keeping the goods in the sheds at the wharf, making a huge bill. Is it all worthwhile I wonder when it's not a smooth process?

Donors Bill and Margaret Hamilton are asking for Prime Minister Commodore Voreqe Bainimarama’s support in their project. This is in clearing items to be shipped to Fiji free of duty especially items to be donated to children living in the interior of Nadarivatu. Mr Hamilton said many people and groups from around the world wanted to donate items for children in Fiji, especially students who were finding in hard to cope with the highland terrains. He said they had shipped a lot of items such as basic necessities that children needed in schools but they were not able to get it through customs.He said they were told to inform the Prime Minister of the matter and they hoped to get the message across by going to the media.

He said they were doing everything for the children; they had donated items such as televisions, exercise books, clothing, library books, computers and also medical equipment that were going to help the people in the highlands get regular checkups at the medical clinic. ‘Some of the really important things that the children in Nadarivatu need, since the area is always cold are warm gloves which they need when going to school in the early morning and that is also being charged duty by the customs,’ he said. “It’s not that we’re saying it’s bad but we are basically giving this as a donation and not something that we bring here to sell. We are only concerned for the children and we want to express our love by providing them with the necessities that they will use in their everyday lives. Exercise books have always been something parents struggled to get during the start of the school year and we are giving that for free,” Mr Hamilton said.

The Hamiltons have been around for some time and understand the basic needs that the children lacked especially in education. Mr Hamilton said they just wanted to give something to the community and they needed the support from the Government in getting these necessary items to the people living in the interior of Fiji. “We have been able to do this with the help of the Nadi Rotary Club who have supported us throughout and we are indeed grateful to them,” Mrs Hamilton said.

Mr Hamilton said they had also brought in a wheelchair for a lady who, they read in the papers, had carried his physically-disabled son on her back for years and thought to provide a wheelchair especially for them.

“The sewing machines are going to help in the sewing of curtains which are to be put up in the various classrooms, because we have noticed the children’s studies are being affected by the heat from the sun streaming in through the windows. This is so that students can concentrate on their classes and not be disturbed by other things.” He said they wanted to get approval from the Prime Minister’s office on the matter and they needed the help so they could help the children more.

Bill and Margaret Hamilton of Victoria, Australia, one of the most dedicated and committed couples to visit our shores, are focusing their attention in helping the people of Nadarivatu.

The couple, who had helped various communities in Fiji, visited Fiji as part of their voluntary work as members of Docklands Melbourne Rotary Club in Australia. Mr Hamilton, with the help of his lovely wife, rendered assistance to schools and medical clinics by donating basic necessities which would help students in their educational studies.

The Hamiltons, who have a grandson of Fijian origin, fell in love with the country and have provided assistance to various schools and communities in the highlands. Mr Hamilton said they were always happy to give something to children who need their help.

He said donating a 40-foot container containing basic necessities for school children and the medical clinic was one of the ways in which they expressed their love for the people and for Fiji.

"It is not about gaining something in return; it is purely just love and nothing more for us and we are always here to help those who need it the most," he said.

"The authorities were there to help us on Tuesday; Customs, Health, Police and Quarantine Department officers were all there to help us transport and unload the container. The villagers from Nadarivatu and the nearby areas also helped.

"It took us about two to three days to unload the container and it was all thanks to the villagers who were present there.

The couple also donated 15 cartons of clothing to Navala Village in Ba following the tragic fire in 2010.

Dr Luveni said the couple's enthusiasm and commitment to continue their generous and most worthwhile projects for the people of Fiji was most appreciated.

She said the time, resources and effort they contributed to the various projects here were greatly appreciated by the Ministry of Social Welfare, Women and Poverty Alleviation.
Posted by Peceli and Wendy's Blog at 2:43 PM

Thank you so much helping these people....
God bless you!

It is a good work done by the customs. There are so many items for staled. I am really happy with their piece of work.

It is very hard work done by this people. I like this creativity. I think this container many items in store. I impressed by that.

with new information. I have found it extremely useful.
TOSHIBA PVM-375AT

Any update on the situation??