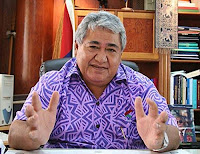 from w
Some serious political stuff has been happening in Fiji during the past week but rather than get all serious about the troubles, at least one person has a different take on it. A Samoan. So as we drink kava in our lounge room this evening with some Tongan friends and tell them one version of the story, here is another that is going around.

Tuilaepa has had a lively relationship with Frank Bainimarama but he delivers here what is probably his most amusing observation yet of the woes of his sparring partner. Prime Minister Tuilaepa Sailele Malielegaoi who just returned from Turkey today blames the current storm-in-a-teacup between Fiji and Tonga on Global Warming.

Asked for comment, the Prime Minister in the best of the Samoan tradition of fagogo (spinning a yarn) said;

“After reading the reported facts, I am super clear that the Fiji colonel went out fishing and got into problems with the current that sucks every debris into the Tongan Trench.

“That the Tongan boat - basking in the sunny ocean - spotted the lone colonel and went in to help. That the fisherman was none other than King George’s relation is of pure coincidence.

“Only in the Pacific do coincidences of this nature are aplenty.

“So in essence, Commodore Bainimarama should be thanking the Tongan government for rescuing Mara.

“He should be telling off his own navy for not helping.

“Perhaps that’s what happens when their admiral spends all his time in politics leaving the navy headless.

“You see, if it wasn’t for the Tongan boat and its alert crew, Mara would probably be in South America by now. Bainimarama then should thank the Tongan king and apologize for all the trouble this incident had caused.”

The only complication these days, said Tuilaepa, are when one introduces un-Polynesian concepts such as sovereignty and territorial waters.

“Those are imported concepts. Back in the olden days, you are free to roam the oceans and feast on its bounties. It belonged to nobody but to everybody.

“It’s a way of life that is above and beyond the purview of modern-day international maritime law.”

“And drifting fishermen are not new in this part of the world especially as hundreds of fishing canoes leave the villages to go out to fish and joyride every day. Some fishermen occasionally get swept off to the open sea and get picked up by other fishermen in nearby islands. For Samoa, Tonga and Fiji, it is tradition that you go out and rescue strayed fishermen in distress then offer them your best hospitality.

“But these incidents are happening all too often these days. Climate change and global warming has meant stronger currents and more fishermen getting cast adrift.

“If anything then is to be blamed for the current Fiji-Tonga hair-pulling, it is climate change.

“Australia therefore should provide us with more naval boats and high-tech oceanic tracking equipment so we can quickly go out and rescue our castaway fishermen.

(Shaking head) “With the way they (fishermen) are getting carried out to sea at the moment, we might not have any more fishermen left by 2012.

“And if more colonels in Fiji go fishing – eventually – there will be no more army to prop up Bani.”
Samoa, the Prime Minister said, does not have a navy except for its lone Police patrol boat.

“In the villages, search and rescue is carried out by a flotilla of fishing canoes. So if one canoe is swept out, you can lose another 20 looking for it.”

The media, said Tuilaepa, are making too big a fuss of what is really a matter in the fale (house).

“It’s really a storm in a teacup. Fiji and Tonga are very close. We have a concept that best describes these two. The Samoan word togafiti aptly describes the warm relations that exists between Fijians and Tongans, the mutual backs-scratching in times of itchiness and the occasional brotherly squabble that occurs between these two.

His advice to Commodore Bainimarama?

“Go fishing. Likely you’ll be picked up by the same Tongan phantom boat that will take you to Nukualofa. After a long tit-for-tat there with Mara and the King, no doubt Bainimarama will come back ready to put Fiji back to the road to democracy and a better understanding of the rule of law and, of course, the law of the sea.
Posted by Peceli and Wendy's Blog at 12:39 AM