Will the young adults go back home?

I don't know if anyone in Fiji has made a study of it , but I wonder what happens when the children of a village or island are sent off to high school and terriary studies, do they ever come back to the village or island?  To hope that scholarships will educate the youngsters with the aim of them building up their home area is fine and they probably will come back - but only on occasion. You hope they will remember to give back to the village, but really you give them a good education to send them on their journey of life wherever that takes them. Most will get jobs elsewhere. What do you think?  Kia Island is in Macuata, an island west of Mali and the people are traditional fishermen.
(from an article in the Fiji Times about other areas of Fiji... Urban Drift is real http://www.fijitimes.com/story.aspx?id=360328) In a study done in the province of Ba, it was found that youths who leave the village to take up high school studies in urban areas often choose not to return.

"Why would they?" asked Peniasi Evo.
Mr Evo is part of the Yakete Development Committee which is now trying to slowly change the mind-set of the young generation and cut down the rural to urban drift.
"For most who finish their school, the village has nothing to offer them. There is no way in which they will be able to enjoy the luxuries of urban life in the village.
"The opportunities for them are limited.
"That is why we are trying new things in the villages. With the United Nations Development Program we are trying to ensure that we make village life viable so we are able to attract the youth back to the villages in Yakete."
The project Mr Evo spoke of has just started and it will be some time until results are realised.
In the province of Serua, Nabukelevu Village, which has a population of about 1000 has one primary school and similarly for higher education the children have to go to urban areas or to the coast.
Mosese Batirua from Nabukelevu said the urban drift was a problem for them as well.
"We live in a place where there is no easy access to transportation, the hospitals are far away, the shops even further and if we do make a trip to the urban centres then it means spending more than half the money we have on transportation," he said.
"That is the biggest deterrence for the youths. They feel that the village has nothing to offer.
"Although the traditional ties are maintained, but that is not the same thing."
This is the same for almost all villages in Fiji. The villages are deprived of their youths and the potential earning power of the village as a collective unit decreases immensely.
There is a fear among the villagers that in the near future, there would be fewer young people left in the village as they head out to greener pastures.
------------------------- 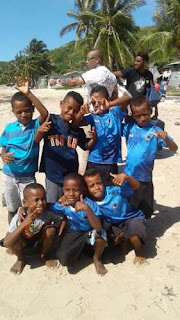 Children of Kia Island at the scholarship program launch. Picture: SERAFINA SILAITOGA
Update: 8:14PM VILLAGERS of Kia Island in Macuata have gathered to raise funds for their children's future.
The Kia Island Scholarship Program has been officially launched for the first time after villagers of Kia working and living overseas decided to give back to their people. 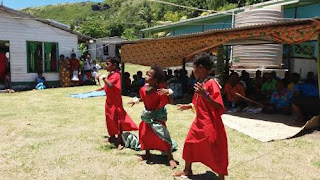 Program coordinator Jim Masiniqa said the program was aimed at educating the children of Kia so they could develop their island home.
-------------------------  And also another story saying the money will be invested, so I hope something is used for the students of 2017!

+ Enlarge this image
Children of Kia Island in Macuata perform an item at the launch of the scholarship program. Picture: SERAFINA SILAITOGA
Update: 3:51PM THE $20,000 raised from the scholarship program held on Kia Island in Macuata after Christmas has been invested.
Program coordinator Jim Masiniqa said this was imperative so the funds could grow and be better utilised for the program in the long run.
"The $20,000 is too little for the program because we have long term plans for our children and their successful future," Mr Masiniqa said.
"So $15,000 has been invested and $5000 has been used for our yaqona farm."
Posted by Peceli and Wendy's Blog at 3:20 PM