When I was researching Fijian music I could never find even one person who played the nose-flute in Fiji though Chris Saumaiwai did. Now there's an article about one man who plays it.  It is more commonly played in Tonga, though even there it is uncommon.
from the Fiji Times:

Echoes from the past, an art almost lost 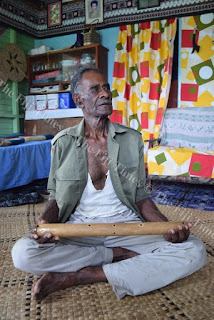 Posted by Peceli and Wendy's Blog at 4:14 PM