My daughter-in-law returned from Fiji last night and brought me a lovely gift - the new book 'Once upon a time in Fiji' which is a collection of fine short stories by Daryl Tarte, a fourth generation planter from Taveuni. I've dipped into it and see that some stories are certainly autobiographical or recognizable as being based on real people. Good on you Daryl. Great job.  Article from Fiji Times.

DARYL Tarte's Once Upon A Time in Fiji is an interesting collection of short stories looking at Fijian mythology, land issues, political upheavals and the national drink, yaqona.
Characters range from the son of a chief to a wheelbarrow boy.
Through his work of fiction Tarte narrates the everyday Fijian life of the busy streets of Suva or the village life of the highlands through the tales of a wheelbarrow boy, a criminal, an educated Fijian who becomes an atheist, an impotent man after the yaqona aphrodisiac, a Fijian chief and a kaivalagi investor, making the reader wonder whether it's an imagined work of fiction or a lived experience of everyday life in Fiji.
Interwoven with Fijian myths and legends of Dakuwaqa, the great shark god, to the ideal Fijian dream, Tarte weaves in stories of friendship, respect, deceit, greed, religion and science. The plots range from ancient myths to a tussle between science and religion in the Fijian society.
Tarte starts off with the typical Pacific Island style of telling stories through a storyteller. An interesting narrative style is adopted to relate the significant historical events of Fijian History.
Very aptly keeping the features of short stories in mind, Tarte covers the history of a more than a century through the "The Story Teller".
Our islands have been hit by seven mighty ocean waves and many people have suffered.
The first was when we were killing and eating each other. The second, when we gave our Islands away to the British. The third, when the Indians came here and slaved for the big sugar company. The fourth when we got measles. Fifth, when Rabuka brought his soldiers out of the camp. Six was George. Then the army chief." (Tarte 2016).
Fiji is a unique island nation with a diversity of people.
Born in 1934, on the island of Taveuni, Tarte has worked and lived among many of the Fijian, Indian, Chinese, European, Pacific Islanders and many people of mixed races.
As a fourth generation copra planter, sugar industry executive, civil society activist and now a writer, Tarte had the foresight to record many of these events and has blended the many incidents and characters into this collection of nineteen short stories.
He has so far published Fiji Fiji Coffee table book; Fiji, an historical novel; Island of the Frigate Birds; Stalker on the beach; Turaga, a biography of Ratu Penaia Ganilau and co-authored 20th Century Fiji.
In August 2015, he published Fiji — a Place called home with ANU and USP Press with over 300 copies sold.
Published by the USP Press, Once Upon a Time in Fiji is a light and enjoyable read where Tarte gives glimpses of Fijian life, culture and history. 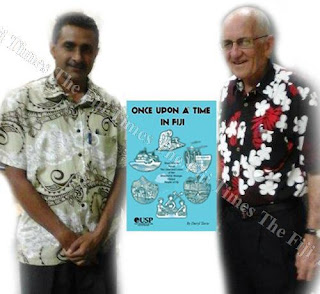 Vinesh Maharaj, left, of the USP Book Centre with the author, Daryl Tarte. Picture: SUPPLIED
Published by the USP Press of the The University of the South Pacific, the 191-page Once Upon a Time in Fiji is available at the USP Book Centre for $18.95. Those with queries can email Vinesh Maharaj on maharaj_v@usp.ac.fj.
Posted by Peceli and Wendy's Blog at 6:20 PM