Many South Pacific Islands have the problem of sea surges inundating villages built right on the sea-shore. Sometimes whole villages are relocated further up the hill which is the way to go. There's a need for sea-walls and do-it-yourself or get help from Fiji government. Kiuva got a $3 million dollar sea-wall - well, you can guess why! And built by a Chinese company. Others get help from Japan and USA, others just do-it-yourself. Photos are of Fiji, Solomons, Kiribas and Tuvalu. And an article here:http://www.umcmission.org/…/20…/may/june/0614risingsealevels

An example is written about in today's Fiji print media. Of course the sea-wall will end somewhere and the sea can still creep up the land! 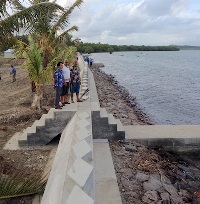 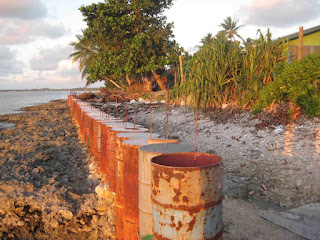 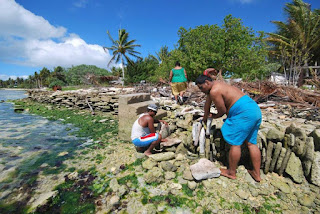 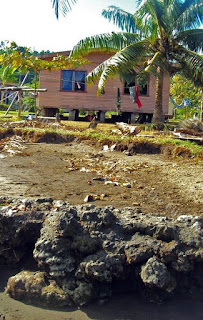 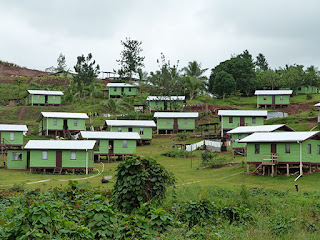 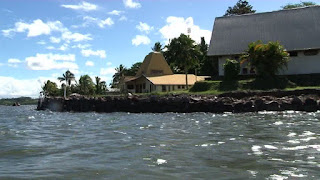 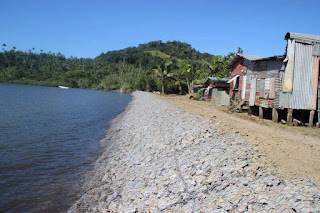 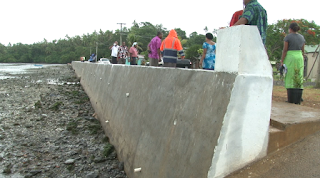 New seawall at Kumi village to help protect against surging tides
By Iva Danford
Friday 30/12/2016
New seawall at Kumi village [Photo: Fijian Government]
Prime Minister Voreqe Bainimarama is not only demanding an end to irresponsible behaviour but is also demanding increased international attention and assistance towards climate adaptation.
Bainimarama made these comments during the commissioning of the new Kumi village seawall and concrete walkway in Tailevu to help protect the villagers from the surging tides that threaten their community.
He says we can protect ourselves from the climate-related events already upon us that requires greater access to climate finance.
Bainimarama says Kumi is one of many villages across Fiji that is threatened by rising seas which is an extremely dangerous consequence of climate change.
He says the story of Kumi is one that he tells often on the international stage when alerting nations to the situation that we face in the Pacific.
Bainimarama says it is the stories of the villagers and experiences that are driving international efforts to end global warming and limit the devastation from climate change and he will continue to be relentless in his own efforts to halt the destructive and selfish behaviour of polluting the planet.
Bainimarama adds he has already told the international community about the over 50 villages and settlement communities that must be relocated to high ground due to rising seas.