from the Fiji Times and thanks Tui for telling the story:

The legend behind the Three Sisters Mountain 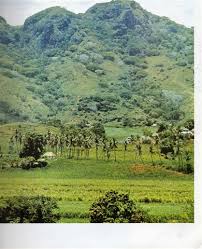 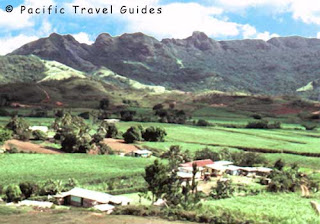 OVERLOOKING the town of Labasa, the mountain range known as the Three Sisters Mountain, carries a historic legend.
In a land hundreds of kilometres away from Vanua Levu, history says that the chief of Nakauvadra in the province of Ra, Kadavu Nakalevu (now known as Ratu Kadavulevu) and his people boarded large canoes and sailed towards the north in search of a new place to settle.
Manoa Tuiwainikai, a landowner of Vunimoli Village who is part of the Sauturaga (Steward Chief) clan of Uluibau, the place which Ratu Kadavulevu and his people first settled when they arrived in Macuata province, said the people of Ra sighted the Three Sisters Mountain from afar while sailing towards Labasa.
This newspaper was told that he was the best person to talk to regarding the history of Macuata because his family kept the history alive by passing it down from one generation to another.
According to Mr Tuiwainikai, its history was passed down from his forefathers to his grandfather and then on to his father.
This is his account of the first settlers of the province of Macuata.
"Ratu Kadavulevu along with his people left Nakauvadra in search for new land to settle on," Mr Tuiwainikai said.
"They came in several big canoes. When they reached Vorovoro Island (40 minutes from Labasa town by boat), they were met with stormy weather and their canoes were smashed into pieces.
"That's how the island got its name 'Vorovoro' because that's where their canoes were smashed into pieces," he said.
According to Mr Tuiwainikai, while they were on Vorovoro Island, from a distant they saw the three mountains and decided to explore the place.
"They followed the Labasa River upstream and left the 'gonedau' (fishermen) there.
The others continued upstream to the landing at Korowiri. From there they went up to the Three Sisters Mountain where they finally decided to settle and call it their home.
According to him, the actual name of the mountain is Uluibau and in the Macuata dialect it is Qoibau.
"It is the Europeans who gave the mountain the name the 'Three Sisters Mountain'," Mr Tuiwainikai said.
"Uluibau is the highest peak in Macuata province. That's why our ancestors made a decision to settle there.
"Each of the mountains has a cave and each of these caves have different exit points," he said.
Like a lot of villages in Fiji, the Uluibau or the Three Sisters Mountain has its own share of superstitions.
Mr Tuiwainikai said that according to stories passed down to him from his forefathers, people who entered the caves situated on these three mountains, did not return alive.
But that is a story on its own and people have the right to choose whether or not they want to believe it.
He said that his late father was the only person who entered one of the caves and came out alive.
"My father actually did enter one of the caves when he was young and made it out alive. He said he found a skull inside believed to have been that of a giant," Mr Tuiwainikai said.
"He told me that he found a skull inside the cave and concluded that people who first settled there were bigger than normal human beings.
"So Macuata was settled for the first time on Uluibau.
"They planted a variety of root crops and the gonedau (fishermen) would bring in their supply of seafood.
"The foundation of their homes are still there," he said.
After a couple of decades, the population increased and some of the people decided it was time to explore other parts of Macuata and settle there.
"They came to realise that their numbers increased so they were told to look for new places to settle.
Their descendants now occupy the villages in the Macuata province and other parts of Vanua Levu.
"Their chief, Ratu Kadavulevu, told them where to go," Mr Tuiwainikai said.
The gonedau clan occupied Mali Island.
The province of Macuata is divided into 12 districts.
Combined, there are about 112 villages in the province.
The 12 districts are: Macuata, Mali, Dreketi, Cikobia, Namuka, Dogotuki, Udu, Sasa, Seaqaqa, Labasa, Nadogo and Wailevu.
Posted by Peceli and Wendy's Blog at 11:07 AM


Do you need urgent loan ?
You have difficulty solving your various problems; to start your own business No more worries, we offer the best of your fast credit service in 72 hours. Build your life through our different loan offers. Our conditions are very simple to all serious and honest people who can refund it with at a rate of interest of 3%. Our transfers are provided by the banks for transaction security. Contact us for more information thanks.