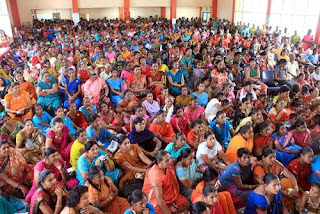 picture by Maneesha Karan.
from w
It was good to see that many women in Labasa met together for International Women's Day as by now there is still concern about gender equality as the 'talk' doesn't always equate with reality.
Special Celebration (from Fiji Times
Wednesday, March 09, 2011
MORE than 500 women gathered at the Labasa Civic Centre to participate in International Women's Day celebrations yesterday. The women observed a minute of silence to remember women who had lost their lives to violence and abuse. The event was organised by the Labasa Women's Forum. Labasa Women's Crisis Centre project officer Sera Bogitini said women did not deserve to die horrific deaths, including being strangled, burnt, and stabbed to death.
-
and from Fiji Sun
Kutty sings ‘the strength of a woman’
writer : CAROLINE RATUCADRA
3/9/2011
It was a celebration with a difference at Labasa yesterday where women from different cultures took a day off from the usual household chores to celebrate their day - International Women’s Day. Women of various communities in the province of Macuata gathered in full force at the Labasa Civic Centre to mark the day.

A packed auditorium was a sure testament to how important the day, March 8, was for the women - the majority came from rural areas. More than 600 women from all walks of life shared music, laughter, role plays, dances and refreshments in unity. Some dressed up in colourful traditional attire while others opted to wear character costumes for the event.

Women were empowered to speak out about their experiences as mothers, wives, daughters and caregivers.

She spoke on the roles and strength of women in society. She said regardless of their past or present circumstances, the important thing was that everything happening or happened was for a reason. “By honouring ourselves and treating ourselves with respect, you set the stage up for others to treat you with respect. “It’s important to view yourselves and to motivate and inspire you to move out of powerlessness and limitation and into the fullness of who you are as a human being.”

The Labasa Women’s Forum organised the event incorporating a multiracial and religious programme.

Ms Kutty said women should always be respected because they contributed a lot towards the family, society and the economy. She encouraged women to exercise their rights and be treated as equal to the opposite sex. The rural women were encouraged not to work in isolation but to work hand in hand with charity organisations and non-governmental organisations. “Amidst all difficulties, I salute the women of the North for holding the fort even with minimal support provided in the past years,” Ms Kutty said. “However, now has come the time to work together hand in hand and educate our children, improve our health, sustain our environment and continue to make social and economic contributions towards national development which will benefit the communities of the North.”
Posted by Peceli and Wendy's Blog at 2:39 PM

March 8 is the International Women's Day for all over World. Today Women in all the sessions made ​​her a different stage. We must respect them.

It is a good picture by Maneesha Karan. We all must celebrating Women's Day. It is a goos that many women in Labasa met together for International Women's Day. This type of gathering makes strong bond.

An international women day is celebrated on 8 March. We all have to respect of power, she has great strength to built any thing or to destroy any thing. Today she is working with men in every field and proved herself that she is great.

Today, many women get so many achievements on their own abilities. We all know that International Women's day is celebrated on March 8. I really salute them.