Why build new churches in Fiji? 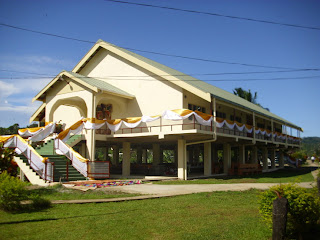 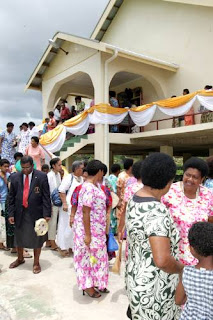 from w
It is astonishing sometimes to read that new churches are being built in Fiji, knowing that the people do not have much money at all. However when you think about it, the significance of a new church is a time for pride in their village, their land, their identity. When there is sometimes chaos in other aspects of life in Fiji and standards are slipping, one strong core to society is faith in God and the community of faith. When the people of Sawani decided to build a new church (the old one was built in about 1925) this signifies the value placed upon order and safety. Like the song 'Rock of Ages' the church building is a place of great value and security when many other aspects of life are insecure.

Two newspaper items tell this story. Their minister is our relative and he comes from Vesi village in Mali and our friends Ratu Eferemi Raicebe and Tepola would have been there for this important occasion.

Village marks opening of new church
Mary Rauto
Sunday, March 06, 2011
YESTERDAY marked a joyous occasion for the people of Sawani as they opened their new Methodist church. The church cost $300,000 and can seat 400 people.

A light shower coincided with the end of the three-hour dedication and blessing of the church. For many, it signified the blessing from above with Sawani Circuit minister Reverend Tomasi Vula describing it as a divine shower.

Yesterday, the vanua traditionally handed the building to the church. Methodist Church president Reverend Ame Tugaue called on the people to not only give the new building to the God but to also give their lives. "Please do not only dedicate what you own or your propety," he said. "The owner must be dedicated."

Speaking at the opening, church general secretary Reverend Tuikilakila Waqairatu expressed his appreciation to the church and vanua, saying that constructing such a big building reflected the good relationship and unit of the people as well as two important institutions ù the church and vanua. "The church is symbolic in its stand because it is in the centre and biggest building in the village," he said. "God is the centre of the community and the lives of the people."

----------
An earlier newspaper article was about the ceremony to commence that building.
Monday, September 29, 2008
PEOPLE from a village have contributed $100,000 for the construction of a church which would be able to accommodate everyone from the area. Sawani Village in Nausori on Saturday held a ground-breaking ceremony for the church. Chief Ro Macanawanai Raicebe said their old village church was built around 1925 and it was too small for the villages who use it.

Mr Raicebe said the villagers wanted to build a church which was strong and could accommodate people from the nearby villages. "The construction of the church would start from Monday (today) and we hope to complete it by the end of the year," he said. The church would be called Sawani Methodist Church.

Mr Raicebe said there were close to 300 people in Sawani Village but during the weekend services, people from the nearby villages came to join them. "The old church building was leaking and had other problems and so we hope the new church would be big enough for everyone," he said.
Posted by Peceli and Wendy's Blog at 11:38 PM