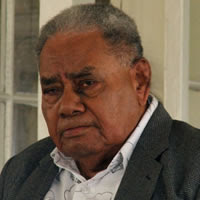 The news of the death of Tui Vuda, former President of Fiji was in the blogs yesterday but protocol really requires silence until the main members of the vanua are informed in the correct way. So the official announcement only came this afternoon. Our condolences go to the people of Vuda particularly.
Former President, Tui Vuda passes away
Publish date/time: 07/02/2011 [17:11]
excerpts from story in Fiji Village

Ratu Josefa Iloilovatu Uluivuda who was born on the 29th of December, 1920, was the President of Fiji from 2000 until 2009. He held the traditional title of Tui Vuda, the paramount chief of the Vuda district in Ba Province. He announced on 28th July 2009 that he would be leaving office on 30th July that year.

Looking at his career: after working as a teacher and civil service administrator, Ratu Josefa Iloilo later became a member of the House of Representatives. He subsequently served as a Senator in the 1990s, and was President of the Senate prior to his becoming Vice President of Fiji on 18th January 1999.

He was in this position under President Ratu Sir Kamisese Mara in 1999 and 2000, when Mahendra Chaudhry's government was overthrown by George Speight and his group in 2000.

He was sworn in as President on 13th July 2000 and reappointed President after the events of December 2006.

In his traditional speech opening Parliament on 1st August, 2005 Ratu Josefa Iloilo told the parliamentarians that they must carefully examine their conscience on the deliberation of sensitive issues and not be swayed by racial remarks which had been a common and unfortunate hallmark of debate in Parliament.

In an opening address to the Great Council of Chiefs on 27 July 2005, Ratu Josefa told his fellow chiefs that they needed to adapt to the modern era, or else risk "simply becoming decorations."

The Tui Vuda was a lay preacher for many years, and was Vice President of the Methodist Church of Fiji and Rotuma in 1997 and 1998....

Members of the Vanua of Vuda met with the Prime Minister earlier today. More details of the state funeral are expected to be released later this week.

Story by: Vijay Narayan
Posted by Peceli and Wendy's Blog at 12:08 AM

How quickly you gloss over this man's role in an illegal military regime,at least wikipedia is more accurate about this man's place in fiji's shameful past. He illegally appointed himself, sacked judges and supported another military takeover,he got off lightly but will forever be tarnished.

Hello Sister of Sara, what I wrote is not done lightly. There's a time and place for a critical, strong appraisal at what happened and the decisions made. I know how many people suffer in Fiji these days.
w.

Iam wid u Sam,na qo ni vei tavu??
Anyway Tui Vuda was indeed a great man.I like the fact that he stood by the prime minister (Bainimarama).I sure that he will be remembered by Fiji for his great work.
Moce na Momo Tui Vuda.