Not scared of the red moon but

from w
Last night there was an eclipse of the moon seen in Fiji as bright red but this doesn't scare the chooks, the turkeys, the little pigs, as much as the idea of Christmas feasting next Saturday. The chooks of Fiji, the turkeys of USA and the little pigs of Tonga are running scared. I think a vegetarian Christmas would be a nice change, but I know it won't happen in our household. We'll pick up a bag of Fiji dalo, buy some pork, chickens, and do what we usually do which is to make a lovo. Prawns though might be nice. We'll have only about eight people, though another seven threaten to arrive! 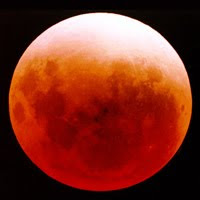 Posted by Peceli and Wendy's Blog at 1:21 PM

And also,
in today's Geelong newspaper there's a strange story of the theft of 400 frozen turkeys from a nearby shop a day or two ago. A truck just backed in, the guys pinched the turkeys and took off. What would you do with 400 turkeys?
w.