Education is for adults also 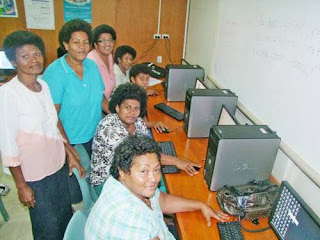 from w
I was happy to read in the Fiji Times that computers are also being used by the mothers as well as the children from Namuka. When child and adult education goes hand in hand that is excellent. Sometimes there is such a gap between the kind of things children can do and that of their parents. When both learn to use computers that is a plus. Thank you Serafina for picking up this story.
Back to School

Women from Visoqo village at their computer class at the University of the South Pacific Labasa centre. THE expressions on their faces were of excitement and enthusiasm as eight village women got their hands on a computer keyboard for the first time. The women hail from Visoqo Village and are part of the Visoqo Village women's club in Namuka, Macuata.

They started their computer course at the University of the South Pacific's Labasa campus this week and were overwhelmed about their enrolment. They described the course as an interesting program that boosted their confidence to continue studies. Club president Ana Vika said tuition fees were paid by the American Government as part of a grant to the club. "The US Embassy gave us five computers as part of the grant. The members get to attend the computer course and learn more about the computing so that we can teach students of Visoqo District," she said. "The school library was a project of the club and the European Union helped set up a solar system in the school to provide electricity for the computers."

American Peace Corps Scott Gaston helped arrange the grant for the women. He said it was about time that children in rural areas were given the best education. "I am excited for these children. While being in that village and school as a Peace Corps volunteer, I want to help them get the best in education," Mr Scott said.

"The children of Visoqo deserve it so we will continue to strive for the best in education and give it to these children because we want them to have a successful future."
Posted by Peceli and Wendy's Blog at 1:56 PM