When there is no Methodist Conference 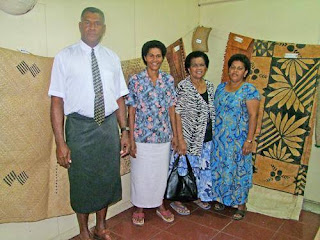 from w
When there is no Methodist Conference - as banned by the current Fiji leaders - there is still work to be done. It is good to see functions organised at the local level, youth events, fund-raising festivals, initiatives in provinces and rural areas. Even a tour overseas for a Methodist High School choir - Lelean. Decentralisation at its best. Also, the ordination of new ministers and deaconesses has gone ahead without the core activities of the Methodist Conference. Choirs sing wherever they are, but this time not centralised in Suva or a designated place. Ordinations are significant events and Peceli remembers way back in about 1964 when he was ordained alongside several colleagues at Centenary Church. Isa, most of his colleagues are gone now.

From the Fiji Times today; something about ordination and the story of a deaconess.
In the name of the Lord
Samantha Rina
Tuesday, September 07, 2010

Reverend Tukilakila Waqairatu (left), Ame Tugauwe (middle) and Laisiasa Ratabacaca at the ordination in Suva. Picture: IVAMERE RASABASABA
HUNDREDS flocked to a special church service at the Centenary Methodist Church to witness the ordination of 23 ministers and deaconesses. The ordination on Sunday was the result of five to six years of studying and training for the 23 who took vows to commit their lives to serving God. Head of the Methodist Church's Indian Division Reverend William Lucas explained that the ministers, which includes two women, completed three years of studying at Davuilevu Theological College and an additional three years of practical and training at various circuits.

"Four deaconesses, who completed three years of studying and two years practical, were also ordained at the service. Families and friends came from as far as Rotuma and Vanua Levu to witness the event," he said.

Upon completion of their practical and based on assessments of their superiors, the ministers and deaconesses were then ordained. Of the 23 ordained, two ministers and a deaconess were from the Indian Division.

Reverend Elijah Dass, who serves for the Indian Division in Taveuni, said he had waited six years to be ordained and was lost for words to describe how he felt. "I am honored to be chosen as a servant of God. It is a great day for me, and my family is proud of my achievement. The six years leading up to this day had its share of hardships and struggles but I have always been empowered with the word of God," said the father of two.

A special lunch was held at Epworth Hall yesterday where the newly ordained clergy members celebrated the event with family and senior members of the Methodist Church.

Deaconess Volirua serves Indians
Samantha Rina
Tuesday, September 07, 2010
NUMEROUS doors seemed to shut when Unaisi Volirua began her search for employment.
And after writing one too many letters of applications to education institutions in the hope of getting accepted, she decided to stop and reconsider her purpose in life.
"I completed Form Seven at Ballantine Memorial School and applied to nursing school, Lautoka Teachers College and even the Police Academy but it seemed like every door I knocked on was closed," she said. "When she finally landed a six-week training stint with a media company, Ms Volirua said instead of feeling satisfied at having found a possible job, she instead felt 'misplaced'. "I returned home to Labasa and it was then I heard God's calling for me. I became an active member of almost every club in church. For five years I was a prayer leader and these experiences motivated me more," said the 34-year-old native of Kade Village, Lomaiviti. Ms Volirua became a confirmed preacher in 2004 and immediately took up deaconess training after being selected as one of the top four candidates from the Macuata Methodist Church division.

Yesterday, she was one of four deaconesses ordained at the Centenary Church ù the difference being that Ms Volirua serves in the Indian Division in Dilkusha, Nausori. "I learnt to speak Hindi in primary school and I enjoy living and working with my Indian brothers and sisters. I would like to bring more of them to know God and to help them understand that He loves us all and is not a racist," she said.
Posted by Peceli and Wendy's Blog at 3:44 PM

Thanks for the update Wendy! Still so disappointed I missed the Lelean choir. I will see them one day!