The Delhi Games - to be or not to be 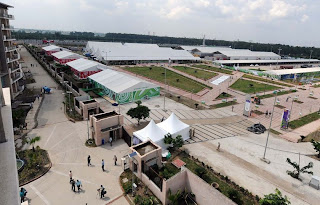 The Commonwealth Games village. From w
At last I see one positive media piece that is not poking fun at India's apparent lack of readiness for the Commonwealth Games. So much written is arrogant and critical and barely sympathetic to the current difficulties. Good luck to the organisers to get it right within two weeks and for the athletes to have a good meet.
I know from the experience of family members what hard work is put in by athletes of this calibre.

Of course Fiji won't be there because of the ban, so Fiji's athletes don't have to worry if the Games are on or not, though it's always good to see the standards and compare with their PBs.

From the ABC Online

Aussie coach shrugs off Games setbacks
By Amy Simmons
Updated September 24, 2010 13:40:00
Miles Wydall says sleep, food and transport are most important for athletes at the Games. (AFP: Prakash Singh)
Commonwealth Games athletes will have more trouble if they are put in a room with someone who snores than if their accommodation is not quite up to scratch, Australian weightlifting coach Miles Wydall says. Wydall is not concerned about the state of the Delhi Games, despite mounting fears over security, hygiene and a dirty, unfinished athletes village.

Earlier this week part of the weightlifting venue's roof collapsed not long after a pedestrian bridge also came down, injuring dozens of workers. But Wydall says as long as athletes can get a good night's sleep, healthy food and transport to and from their venues, the Commonwealth Games should run smoothly.

"We've stayed in some really fancy accommodation and some places that are very ordinary but I've probably had more of an issue when I've been bunked in with someone whose been snoring all night," he said. "We've been to the Pacific Islands and eastern European countries where there are a variety of standards, but I tend to look at it thinking as long as I can get a good night sleep and there is some quality food there, I'm not particularly too fussed at the standards of the hotel.

"We know what the worst is like and we're hoping it's not like that [in Delhi], but then funnily enough they're the trips that you somehow remember with a certain fondness." He says he has stayed in pristine accommodation where trips have been ruined because of bad food.

"I think it's just having the proper hygiene yourself and making certain food choices and I think these guys are experienced in that and the coaches of course know what do," he said.

Australian super heavyweight Damon Kelly, who competed at the Beijing Olympics in 2008, says he is trying to stay focused despite the problems. "The weightlifiting venue roof is leaking, all the ceilings are cracked, all the sewerage is blocked up, it's not quite finished," he said. "But there's nothing we can do. India won the right to host it so they've got to do the best they can and if that's the best they can, then there's nothing we can do about it. As an athlete, you've just got to be focused on your training and the competition and try not let anything worry you." He says there is no way he would pull out of the Games. "For a lot of sports the Commonwealth Games is just another event for them, but for weightlifting it's almost the pinnacle, our chance to do well and get noticed," he said. "I have been building up for the Games since December last year and this year all I want to do is compete at the Games. That would be the same with all the weightlifters."

The Commonwealth Games Federation president is having high-level meetings with the Indian government today in an effort to salvage the event.
First posted September 24, 2010 13:28:00
Posted by Peceli and Wendy's Blog at 11:04 PM