Sobosobo what a passing out parade 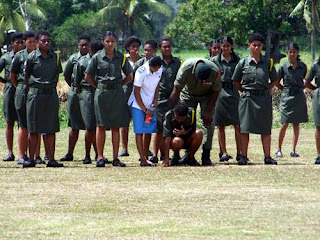 Students feel the heat during the All Saints pass-out parade. Picture: SERAFINA SILAITOGA

from w
I thought - okay it's just another cadet passing out parade but this time the blistering babasiga heat got to the boys and girls of all Saints Secondary School during a (perhaps long) speech. Down the kids went, one after another, falling in the heat with dehydration. So what do you think about students doing training in an army type corp? I don't like conformity myself and also anything to do with guns, but training cadets to be disciplined seems to be popular in Fiji.

Theresa Ralogaivau
Monday, September 13, 2010
IT was a flurry of rescues for groups of Labasa cadets weakened by the scorching sun. One after another, the cadets of All Saints Secondary School participating in the pass-out parade, collapsed under the intense heat of the sun on Friday. Teachers, soldiers and other students ran in armed with water bottles and stretchers. Some of the students had to be carried off on stretchers.

The spate of fainting happened after the students had gone through their drills and were listening to a speech presented by guest speaker, Lieutenant Colonel Inia Seruiratu. School principal Sumiran Pratap said the blistering heat and other factors contributed to the collapses.

"We had health officials on standby knowing that this usually happens because of the heat and the dry wind and the fact that they have been standing for a long time," he said.

"We asked the students to have a good breakfast and take a lot of water before the cadet pass-out." 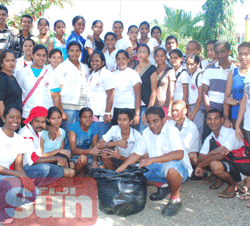 All Saints students on a better day.
Posted by Peceli and Wendy's Blog at 1:56 PM