Ulamila at a wedding - a story I wrote

It's full circle today - the One Hundred Nights since Peceli's funeral, and today I was given a story I had written a while back which is being used in high schools in Sydney as study material.  It is from the point of view of Peceli's mother as she attended out wedding on the last day of December 1966.  Then Peceli's funeral was December 31st 2015. Full circle it seems.

I feel uncomfortable instead of proud.
The hard wooden stools in the Wesley Church in Lautoka, Fiji, make me ache for the soft pandanus mats of my island home in Mali. To sit on the floor is so much more comfortable than sitting upright and straight. It is the afternoon of December 31st 1966 and the marriage of my third son to a vavalagi woman from Australia.
‘Nau, sit still,’ hisses my daughter Suliana.
About a hundred people pack into the wooden church, Fijian, Chinese, Indian, and Australian. The organ makes its show, unmusical heaving sound. My son is marrying a vavalagi. She is dressed in a white dress and veil in the European manner. She is strange to me partly because she is so unsure in my language which she speaks abruptly and incorrectly. I have to listen hard to search for meaning.
Even the language of the marriage service is mainly in English. I lean forward to grasp some of the words but the meaning eludes me. It is easier when the minister uses some words from my language. I wear my new blue cotton dress and blue underskirt and I sit with my daughter Suliana, the two little granddaughters, and I sit behind two of my adult sons dressed in their best sulu, jackets, shirts and ties.
My right leg is itchy. I give it a scratch and Suliana smacks my hand. 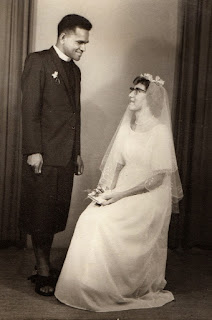 Two hours later we are at Jasper Williams School for the wedding feast. Four hundred people throng into a long hall which is three classrooms opened out. We all sit up at wooden tables. The marriage feast is excellent with turtles, cooked pigs, taro, yams, cooked in the underground ovens by our relatives, and the women from the church have made chop suey, rice, salads. I do not care for the foreign foods and I eat fish, turtle and yams using my hands instead of the silver cutlery set before me.
Formal speeches are given and my son makes a brief speech in English. I feel a tremor of unease that we are losing him from our culture to the stranger’s ways. She would change his ways, make him eat English style with plates at tables with knives and forks. He will not sit on the floor with us any more. Laugh, tell stories, dance the meke.
And she would not know how to plant yam, clean the yam garden and to harvest the main food of our people.
An earlier time comes to mind. How unhappy I had been when my father insisted that I marry an ugly old man.
Many, many years, perhaps thirty-two years ago, I was living in Cikobia, a small island far from the mainland. My family, who were of chiefly status, wanted me protected from the changing ways of the people. On Cikobia I learned to make baskets, mats, to paint barkcloth, to sing, to dance, to catch fish in nets and to find many kinds of sea creatures.
When I was seventeen my father sent my uncle to fetch me for my engagement to a man I had never met.
When I saw this man I was devastated. He was tall enough, but his skin was so shiny black and his eyes were the bold black eyes of the mountain men of Seaqaqa. His bushy hair was long and spreading above his head in the old style of the warrior. He was nearly forty years old.
I cried to my father not to force me to marry this ugly man. ’I am an island girl from Mali, the daughter of a Christian chief. My skin has been kept fair and I am skilled at gathering seafood. This man might take me up to the hills to live, and he certainly does not look like a kind Christian man like you Father.’
My father reassured me. ‘You will live near the new Labasa town, not far away from relatives.  Irimaia Ratawa has good land near the river and also land down the coast.’
I thought of Labasa town, a swampy place with many Indian sugar cane farms, three shops and two Fijian villages. Away from the sea.
My father insisted and there were ceremonies of engagement and promises between my Verata clan in Mali island and the stranger’s relatives from the bush. My relatives gave many bundles of exquisite mats, cream and golden, and many yards of brown Tongan barkcloth and the black and cream Fijian stenciled type. Many whales’ teeth were exchanged as well.
I was often excluded from the ceremonies and just stayed in another house or on the edge of proceedings.
‘Mila, you must get tattooed before your marriage,’ my aunt said. There was no getting out of it. The black designs in my private area would remain with me forever and no-one would ever see them except my husband and the women  when we bathe in the river each morning and evening.
The church ceremony in the Methodist church was brief and the short, stout minister read from his hymn book and my relatives and my husband’s relative sang hymns lustily but I did not listen well. I was dressed in a white dress and underskirt and my husband looked uncomfortable in his new sulu, jacket, shirt and tie.
Later we dressed more appropriately in yards of brown, black and cream barkcloth and I also wore a gauze-like ribbon of barkcloth on my arm and another across my breast to signify my family’s chiefly status.

Throughout my growing –up years my hair had never been cut short in the usual way. Behind each ear were long, curling locks of hair that had never been cut. This was called tobe, the sign of being a virgin. These were roughly shorn from me and my long curls floated to the ground.
I was taken by my two aunts into the prepared bridal house where about twelve colourful mats were placed on the floor with several new pillows. I was afraid and ashamed to become intimate with the ugly man who was now my husband.
Next morning my aunts checked the sheets and declared that, ‘Indeed, yes, Ulamila had been a virgin.’ So there was now another feast for the relatives to celebrate.
I survived marriage to the man and bore eight children to him. I was contended and loved the children and never hit them.
Now the four children other young women bore to him, that was another matter for argument, but I rarely raised my voice in anger.
When Irimaia died, I returned to Vesi, my own home village and took two of the children. The other six children were scattered to various relatives. It was a time of loss as I had come to love the ugly old man over the sixteen years we had together.
‘Nau eat your cake!’
I am called back to the present when my daughter speaks to me. But it is too sweet and made with sultanas which I do not like. The cake had looked pretty earlier with its circle of frangipani flowers on top. I made a pretense of eating.
I looked over at my son who is sitting proudly with his vavalagi wife. Perhaps she too is a bit frightened about marriage to a stranger and to become part of our culture now. There is a great distance to leap, even more than when I as an islander girl was forced to marry a man from the mountains.
I smile at the white-skinned girl because she will find our ways strange. In every generation there are changes. When my own mother married, as she told me one time, the custom was to tie on a liku, the short grass skirt. She did not have a ceremony led by a little stout man holding a black book in his hand.
The generations do go on. I look at my granddaughter, Ulamila Kisi, my namesake who is sitting near me at this marriage feast and wonder also about the children who will come for  this new marriage. I know that change in customs is not as important as the circle of marriage and the bearing of sons and daughters.
My son Pime stands up and comes to me, kisses me on both cheeks, sniffing in the Fijian way.
I decide to be kind to my daughter-in-law and will not be hard on her if she cannot plant and care for the yam garden. 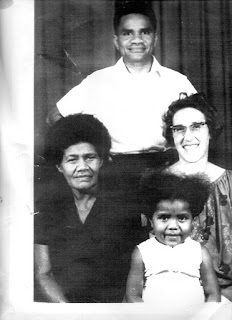