from the Fiji Times last year:  The Kia people are traditional fishermen and related to the people of Mali Island. We can see Kia from Nukutatava Beach.  The photos below are from a different website - a blog from visitors to Kia to explore the reef. 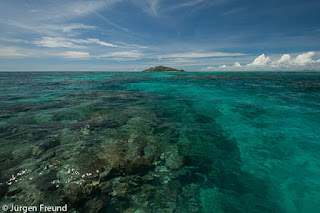 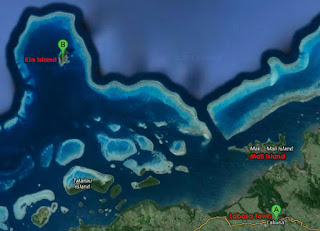 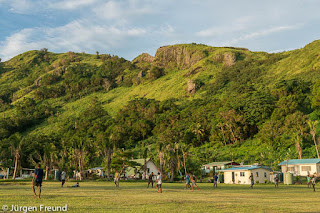 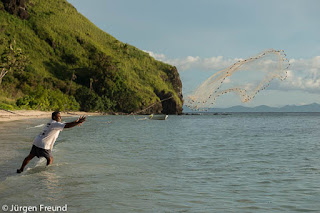 + Enlarge this image
Chef learns a new technique from Ateca. Picture: LANCE SEETO/SUPPLIED
At the turn of the 19th century, sandalwood was one of the most valuable and sought-after timbers in the old world.
When the tree was accidentally discovered in Fiji's northern islands, a bloody, decade-long timber boom began. Spanish, British and American ships descended upon Vanua Levu - the Sandalwood islands. We're in Ligau Village, Kia, an island in the Macuata province that was once an outpost in this wild west shootout for sandalwood. Welcome to a Taste of Paradise.
Much of Fiji's pre-colonial history can be read in the journals and diaries of the sailors, clergymen and missionaries.
They may be a one sided account of the old days, but it is the only written record Fijians have of their pre-colonial history. One that caught my interest was of English sandalwood trader, William Lockerby.
He had arrived to Fiji in 1808, a few months earlier than the first Chinese onboard the Eliza. It was the peak of the sandalwood boom and every businessman, conman and pirate was attracted by the tales of undiscovered riches. Fiji was yet to be discovered by the European explorers. Lockerby kept detailed accounts of his observations.
The early 1800s were like the California gold rush of the old wild west. The good, the bad and the ugliest examples of the papalagi, the white man, was about to descend on the unsuspecting native civilisation.
AROMATIC TIMBER
The light brown timber of old sandalwood and butt of the tree contains an aromatic oil; long prized in Polynesia for scenting coconut oil.
Whilst the Tongans prized the fragrant timber, high prices on the Chinese market made it one of the most valuable timbers in the world, as it still is today. In Asian countries, sandalwood carvings are used in religious ceremony whilst the sawdust is turned into joss sticks and incense for prayer.
For the native Fijian of this period, the sandalwood trade brought regular exchanges of goods with the Europeans, and the bartering for anything made of iron; a new commodity to the Fijians. But the decade long sandalwood boom was also the bloodiest in their dealings with the pale skinned papalagi.
So precious was this timber that many European traders would raid villages or other ships - and sometimes even murder for it. Unfortunately for the Fijians, their first contact with the white man was with some of the worse band of misfits, conmen and pirates to sail the high seas.
The wariness and mistrust of the strangers would set the tone for the next century, as Fiji was no longer an undiscovered country.
JOURNEY TO KIA
Lockerby's journals recount an island outpost on the northern side of Vanua Levu called Kia, and lucky for me that the Reef Endevour was pulling into anchor off its shores.
It was once known as Brown's Island, supposedly named after an American ship's mate who had stumbled upon a treasure of untouched sandalwood plantations. Along with other Americans and Englishmen, Mr Brown had essentially taken over the island with his motley crew.
Several ship's iron cannons had been placed high on the hills to ward off any invaders. Lockerby recounts they had been there a "dozen years ago" - placing their installment around 1795 - something the local villagers I spoke to, did not know.
STRONGER WOMEN
The village is at the base of a hard mountain rocky range with sheer cliff faces. The village women at Ligau tell an amusing story of when their forefathers and brothers trekked up the steep hill to mount the cannon for Brown.
More than a dozen men lifted the 2 tonne iron cannon up the treacherous mountain. As they reached about halfway up the peak the men collapsed from exhaustion and sent message for the women to take it to the top for them; and they did. The women laughed, "We're stronger than the men!" I was dying to see the old cannon documented in the sandalwood trader's journal.
The village elders said it was still there but expressed doubt we would make it. I don't blame him! Lucky we have a remote controlled drone camera, it was a long way up and over the peak.
Watching the drone's monitor, we all waited in anticipation, it was like finding a needle in a haystack, but finallyâ€¦there it was. We'd discovered the cannon that William Lockerby had written about more than 200 years ago.
* Lance Seeto is the award winning chef based on Mana Island, and is Fiji Airways' Culinary Ambassador and host of Fiji TV's Taste of Paradise. Sunday 7.30pm only on Fiji One and online at tasteofparadise.tv 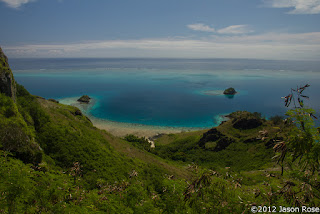 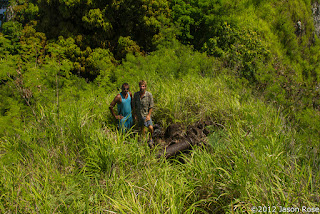 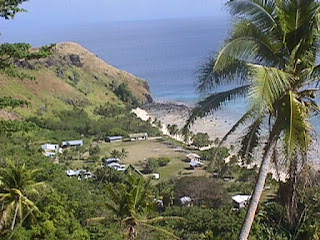 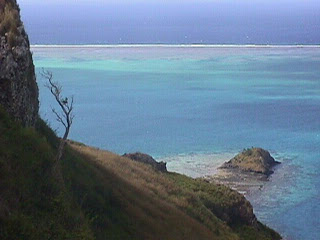 Posted by Peceli and Wendy's Blog at 5:40 PM