Copeland did well in the Australian Nationals, coming third.  He can almost qualify for the Olympics.
And the athletes are doing well in Suva for the Cocacola Games especially the throwers, who are breaking records.  For some pictues of the current games go to https://www.facebook.com/fijivillage/  And even in
Australia our family have won medals  - especially Andrew who used to be in the Fiji squad but now is in the Masters.  A few years ago even Rev Peceli had a go at javelin. 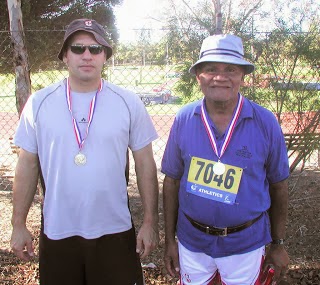 Copeland recorded a throw of 81.76m and is on the verge of qualifying for the Olympic Games in Rio, Brazil.
To qualify automatically, the 27-year-old must record a throw of 83m in the next qualifying event scheduled to be held in Fiji, in July.
"I firmly believe that Leslie will qualify for the Olympic Games," Copeland's coach James Goulding said in an email.
"Leslie competed yesterday (Sunday) and threw 81.76m. It was short by 1.24m of the Olympic qualifications.
"Leslie and I would like to thank our sponsor Shop N Save, Athletics Fiji, FASANOC, International Olympic Committee and the Fiji National Sports Commission for all the support that was rendered towards our training stint in Australia," Goulding said.
Kiwi Stuart Farquhar won the AAC javelin final after recording a throw of 83.93m. Australian Hamish Peacock was second with a record of 82.84m.
"Leslie is a great testament to the success of lengthy blocks of intensive training and competition. It really works," said Bob Snow of Oceania Athletics.
"A great result for Leslie."
Pacific's sprint king Banuve Tabakaucoro competed in the AAC as well.
He finished 6th in the 100m final with a time of 10.5secs. In the semi-final, Tabakaucoro clocked 10.35secs. The Olympics qualifying time is 10.16secs. 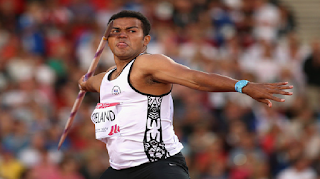 Posted by Peceli and Wendy's Blog at 3:33 PM