Still talkin' about a new flag

I thought the topic had gone cold as so many groups and individuals were opposed to changing the Fiji flag, but it seems the new design is still on the agenda. The poor designs in the competition so far were unacceptable so I wonder what new designs they will come up with!  The PM said the only thing they will retain is the navy blue colour. Sobosobo, it's not navy blue, it's Pacific blue, a lighter colour than navy! Story from Fiji Times. 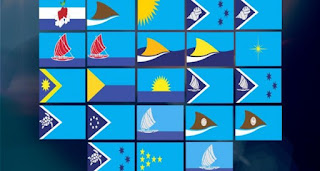 New flag 'inevitable'
Luke Rawalai
Sunday, January 17, 2016
FIJI should have its new flag flying high and proud by Constitution Day on September 7, says Prime Minister Voreqe Bainimarama. Mr Bainimarama said the flag change was inevitable, adding that his Government would go on with their plans for a new flag despite calls not to do so. Mr Bainimarama urged people on the island and around the country to actively participate in the flag designing competition that was currently progressing in the country, adding they should select the new flag design in a few weeks.
Speaking in the iTaukei language, Mr Bainimarama told members of the public in Wairiki, Taveuni that his Government had brought in a new reign. Therefore, Mr Bainimarama said, it was only fitting that they changed everything from old to new.
Reflecting on his earlier statements about the flag change, Mr Bainimarama assured every Fijian the change would carry on despite calls from different political groups and certain people not to do so. He said Fiji was on its new journey to development and freedom, adding a new flag would reflect the change and progress that his Government brought about.
Responding to calls from members of the public on the island for the retention of the coat of arms because of its symbolic status to the people of Fiji and its history, Mr Bainimarama said the only feature of the flag to be retained would be its navy blue colour. Apart from that, Mr Bainimarama said everything in the new flag would change and be replaced including the coat of arms.
Some people had also requested Mr Bainimarama to retain the depiction of the lion on the flag as it was a reminder of the country's history with the English and their contribution to the growth of the nation. According to some members of the public, the depiction also reminded the country of its ties with the Commonwealth of Nations.
Posted by Peceli and Wendy's Blog at 4:15 PM