With great sadness I write that my husband died last Sunday morning as the sun rose - in his bed, in his house, without drama, just quietly in his sleep. He had been ill for a while but still had a great Christmas with family a few days earlier. The funeral was held in Geelong on New Year's Eve, 49 years anniversary of our marriage in Lautoka in 1966. It's a difficult time for us but we know that he has gone to God as he was always confident in his Christian faith.

The eulogy that I wrote and delivered:

Eulogy  - Rev Peceli Soqovata Ratawa      21 July 1936 – 27 December 2015
It’s the year 1936. Labasa town was only four Indian and Chinese shops. A hospital had just been opened and many babies saved with a new drug. One was Peceli Soqovata Ratawa. There was the Fijian village of Naseakula there but one family lived independently -  Irimaia and Ulamila Ratawa and their children -  in a grass bure filled with visitors from Cikobia and Mali most of the time. The seven children went to a nearby school where the English language was strange because everyone around spoke Labasa dialect or Hindi. Bula sia!  Aap Kaise hai!  Peceli and his siblings had an enjoyable life catching fish and crabs, riding a borrowed bike, helping with chores, running to buy bread at the Chinese store. Peceli’s father died when Peceli was eight and the family divided – some to Mali Island, some to Naseakula village. Peceli to the village. By fourteen  he left school to work with a cousin as a carpenter but it’s wasn’t enough. Uncle Viliame was a pastor and talked about a new Bible school down the coast, so Peceli packed up his mat – a bit crooked as his Mum could not weave well – and caught a boat to Naduri.  At the Bible school Peceli was popular because he knew how to plant rice and use bullocks, having learnt from his Indian friends in Labasa. He was inspired by Rev Setareki Rika who sent him on to Davuilevu near Suva – a whole adventure ahead for this country teenager.

There he was mentored by two Australian missionaries, Rev Cyril Germon and Rev  Alan Tippett who was developing new courses for theological students. The students were modest youth, treating girls as sisters, working in the cassava gardens, studying and going out preaching on Sundays. Peceli was praised by Rev Setareki Tuilovoni in the youth department because he could control bullocks to plough up the fields. After graduation Peceli was sent to start a new Bible school at Nailaga for a year and apparently was popular with the Nailaga school girls there.

Next came an appointment to Naikoro way up in the mountains – no road, just riding horses to get there. He decided to get married, got the boat to Labasa to find Ateca who was from a chiefly family and they were married in Suva by Rev Niko before journeying up to the mountain village. Soon they two children, Ulamila and Ateca. Peceli was devastated when his wife died when the baby was four days old. Family came to the rescue. His sister Suliana looked after the girls in Lautoka. The Methodist Church knew Peceli spole Fiji Hindi bhaat so appointed him to be a padre to the Fiji Indian community in Lautoka.

Then I come into the scene finding this handsome young man with a huge laugh intriguing and we married on New Year’s Eve 1966, 49 years ago with about 350 guests at Jasper Williams School. So today again we are providing hospitality again to a crowd for vakatawase. Sobosobo.

Life in the Indian Division was wonderful and George and Robin were both born when we were in Rakiraki. These were wonderful years living amidst the cane-fields. Then after a year at Dilkusha we realized the family in Labasa needed Peceli’s help about land matters so we took a boat trip, even with Kanakana  our pet pig, up to live in Vatuadova, the family village 10 k out of Labasa.  This was 1971.

Living amidst cane farms and a mainly Indian community was fine but financially draining. It was important though and a learning curve for me to be with the extended Ratawa family and I enjoyed knowing my new kin – especially Evia and Suliana, and Mila and Teca and their cousins. I taught art part-time and Peceli organised several development projects – timber logging, church building, trochus shell, a modest eco-tourism spot at Nukutatava, but there were difficulties. We moved to the beach at Nukutatava where we had built three bures  and Andrew was the new baby by then. Peceli loved Nukutatava with a passion. It was idyllic especially at sunrise. 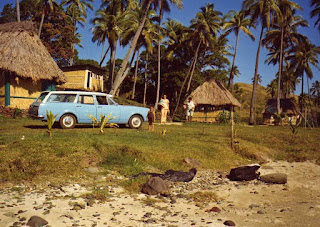 A mango plops on the wet grass,
I collect a handful to pare and slice.
Parrot mangoes coloured sunrise.
I hear Rinieta singing
as she strolls towards the spring
where water drips like plucked strings.
This is the day, this is the day
that the Lord has made..
Light catches the plaits of bamboo
as I sit on the doorstep,
cannot speak for the sheer wonder of it
as the soft scarf of the sky
floats with seeping dyes
and Vorovoro hangs on the skyline.
The colours die into a bland talcum day:
The baby will wake in an hour.

Peceli was a good talatala, as he loved people, talking with them, leading in worship. He could spend time with ordinary people with grace and humour and he appreciated his own Fijian culture and protocol. But.... it was time to move on as I had taken the children to Australia wanting to see my family again n Swan Hill. Peceli was offered work at John Knox church as the local churches were merging, and he was confronted by the different lives of the local Aboriginal people in the Mallee. They called Peceli ‘brother’ but not me ‘sister’. My own family were good to Peceli though occasionally confused by the cultural shifts and the good appetites of our three boys.

Then he was appointed to Hopetoun where the delightful wheat farming community took us into their hearts. He learnt about the stump-jump plough and that you don’t bash into people but be gentle when you are sharing the pain of life as well as enjoying the good moments.   He sometimes looked back with nostalgia to Fiji days  yet lived  in the present moment, listened to the laments  about weather and mouse-plagues but appreciated the local church and other blessings. We both loved  the six Hopetoun years where we and our three children had many friends.  Peceli played golf, indeed he did, with a passion.

As the boys grew we were challenged to move to a city environment to East Geelong Uniting Church, a shared parish with St Andrews.  The congregation was a steady one, conservative,  yet they accepted a Pacific Islander for up to nine years. We linked up with the Fijian community in Melbourne so life was balanced, with holidays in Fiji, and our boys thrived at Geelong High School across the road from the manse. I was a bit of a shipwreck regarding housework as my energy was diverted to study art again, at Deakin University and do a couple of degrees. Yet Peceli and I were committed to the church community as well as people on the fringe of society.  We loved Geelong, never wanted to move, but time was up and we had to find new challenges such as a bit of study at Monash for Peceli, some short-term pastoral placements such as at Dandenong,  and we bought our own home at 13 Boundary Rd. George and Robin moved to Fiji to work, Andrew stayed around. Peceli and I compiled the stories of the journey and published ‘When the Spirit says move’.

Adventures continued in retirement life, but one tragedy is uppermost in our memories when our second son. Robin Iliesa Tupou, died in an accident at a Fiji  resort  where he worked. George was working at the time at NLTB.  Fiji life was in chaos because of a coup – in 2000. Our three sons married Fiji girls – Bale,  Salanieta, and Eka, all wonderful women and we delight  in our grandchildren – Talei, Epa, Jordan, Andrew and Linlay.

Do ministers retire?  I don’t think so. There’s  always  pastoral matters, some preaching and visiting – most recently at Colac, mentoring  young ministers, reaching out, inviting people  in with hospitality. Peceli never tired of wanting to meet people, and dreaming of trips to Fiji.   Now after a serious heart failure incident over five years ago, Peceli had to slow down, give up golf and some meetings such as Rotary, but he still drove his car, though sometimes jumping a kerb. 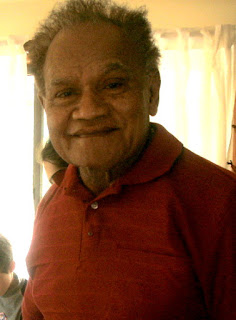 This Christmas time has been a huge blessing with all our close family living together and spending quality time eating, singing, praying. It was wonderful.  Then on Sunday morning the spirit of Peceli was moving on. No drama. No pain. Just  in his  sleep as the daylight came. We have been blessed in our family by Peceli and give thanks to God for his inspiration to us in loving God and always telling us, even to the doctors – God is with me, here or wherever I go.           Thanks be to God.
Posted by Peceli and Wendy's Blog at 1:00 AM

I am so sorry to read of your loss. I do not know either of you but have enjoyed reading your blog in Alaska for several years.

What a beautiful eulogy for a beautiful man! Our condolences to you in your great loss. We too have appreciated reading your blog. The two of you have been a blessed partnership and an inspiration to many. My wife has used your poetry in her liturgies (with proper citation of course!)
The Fiji Church has turned out many great men of God - Setareki Rika was the senior minister who in 1960 persuasively urged the Fijian Synod to share together with Indians in a United Conference. Peceli too has followed his calling with dedication and worked among all peoples with love and compassion.
To God be the Glory!

Thank you Andrew and Carolyn for your kind words. Now it is four weeks since Peceli died and I realize the difference it is making to our household. After the shock of the first week where I was so busy and actually hyper, it has now dawned on me how we will miss his smile, yarns, drives, kava drinking and prayers. Isa, it's a hard time but we are grateful for the peaceful way his last chapter has been.