After fifty years of ordination

I found this file that Peceli wrote for a gathering of ministers remembering their ordination.  It was from 2014. The photo was taken at a National Conference of Fijian congregations of the Uniting Church - a few years back  - the three in the front have passed on - Aminiasi Qalo, Inoke Nabulivou, Peceli Ratawa. Isa, now Peceli has left us and I remember his colleagues Aminiasi and Inoke. 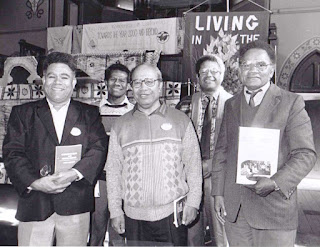 Thank you for the invitation today to share with others who were ordained forty or fifty years ago. A question I ask is why I have survived when most of my colleagues have passed away. I am 78 which is regarded as elderly in Fiji. When we look back to the years since our Ordination we give thanks to God for the opportunities, and I am grateful for the experiences in Fiji and also in Australia and for my wife Wendy and family.
I started very young in the ministry going to a Bible School when I was sixteen and I turned 21 while I was in the theological college in Davuilevu Fiji. The old system then in the Methodist church was to have three years study and three years practical work before ordination. The Principal at that time was Rev Tippett and another teacher was Rev Cyril Germon.
A few things I learnt early in life – was that once you have been ordained you are marked for life. Also it was a time of following a leader, people who become a mentor to us. Like Rev Setareki Tuilovoni, Rev Setareki Rika. They noticed that I knew the Fiji Hindi language so that I would be able to work amongst the Fiji Indian community at some stage. I worked in a mountain village in Navosa then was sent to the Indian Division to Lautoka. My induction was not in a church but out of doors at the main Lautoka football ground to a mix of all kinds of people. Wendy and I married about that time. After working in other places our family moved to Australia and we were in Hopetoun when the Uniting Church was formed. It was unusual then to have Pacific Island ministers in Victoria. In the Mallee I learnt more about the Australian way of life and I took up golf which was a great way of meeting the men who were not always in the Sunday church and then they started coming to worship possibly to talk to me about my wins at golf.
I am grateful for the time I spent with Aboriginal people in the Mallee and was at that time involved in meeting with in Swan Hill, Robinvale and Mildura and the Berriwillock wheat scheme funded some of my travelling. One thing is about the stump jump plough. Some people are rather tough like mallee roots left in a field. Instead of crashing into them, the stump jump plough gently rides over them. I think this is how we can manage our lives so that we don’t get offended and hurt by those who reject the Christian faith.
In Geelong East our family developed – the boys at Geelong High School, their footie, their tennis and Deakin for George. Wendy was on-campus at Deakin and I was closer to Melbourne to visit the Fijian congregation at that time in Richmond. At the Ormond Rd church the congregation were brave to have me as minister for nine years. My preaching was never brilliant but I did my best. One woman often commented positively. One day I asked her – ‘Hey Doreen, how did it go today?’ She answered, ‘Fine of course, but actually I didn’t bring my hearing aids today.’ The good relationship with some of our Geelong East and St Andrews members has continued until today.
Retirement is not letting go for a minister. We wanted to remain in Geelong so bought a house at 13 Boundary Rd. I found volunteer tasks to do such as Donation in Kind, some study at Monash, some locum ministry connecting with churches, and playing golf. These days I’ve slowed down due to health matters but still go most Sundays to Altona Meadows/ Laverton Uniting Church to support a small Fijian group there. In Geelong we have a strong Fijian network with many young couples. We call our group the Fiji Geelong Friendship Club. Last week we celebrated Fiji Day for about 30 people in our back yard with traditional food such as cooked in an underground oven. And at present we have a household of twelve at weekends, so retirement is not dull. Wendy and I thank God for the long journey.
Peceli Soqovata Ratawa

What a journey for you and Peceli Wendy. We , the Baxter Family have been fortunate to call the Ratawa family friends and to have shared some of that journey with you .We so miss Peceli. Joy Baxter.

Thank you Joy. You have been a great friend to Peceli and our family - the good times and the difficult times. Gentle, intelligent, kind.