Isa, Padma is treated so unfairly

I missed this article in December but I think it's important not to be silent as so many people have been about the unfair treatment by the Fiji Government towards Padma.MONDAY, DECEMBER 14, 2015 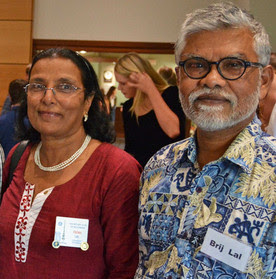 “Then they came for me: no voice for Padma"
by Professor Wadan Narsey

I have previously refrained from writing about the Bainimarama Government’s banning from Fiji of Dr Padma Lal (wife of Professor Brij Lal) from Fiji, because she is my sister and it would be perceived as a “conflict of interest”.

But more and more, senior executives in government and public enterprises suddenly resign, allegedly “for personal reasons” which often means, given that they are at the height of their experience and ability, that they were being pushed out.

Or they are just brutally given their marching orders, resisted with futility sometimes, just as some executives at a major media company were, and to rub salt into the wound, their marching orders are often given by expatriates of dubious merit, appointed to high positions by the Bainimarama Government.

If they are lucky, they are put out to pasture in sinecure appointments here and there or in embassies overseas.

Prominent newspaper publishers have been deported for doing their jobs professionally and ethically.

You can draw up your own list of such persons.

What is shocking however, is that there has been no public outcry at possibly unfair terminations of contracts.


It might be too much to expect individuals to protest publicly. They may feel too exposed (it is hard enough for them to criticize the government privately to me, as they look over their shoulders to check who might hear).

But one does expect organizations associated with the “dis-employed” person to publicly register their protest if there is any possibility of an unfair dismissal decision.

But that does not happen either, just as it did not when Dr Padma Lal (and Dr Brij Lal) were banned from entering Fiji.

I shall only write about the failure of institutional responses, and only with respect to Dr Padma Lal, about whom the Bainimarama Government said not a word, and whose only “crime” seems to be that she is married to Brij Lal.

She is a Gujarati girl from Toorak, one of the first science graduates and indeed gold medalist from USP, who later taught at USP.

She did pioneering work in marine biology, and a pioneering PhD in environmental economics in relation to Fiji’s marine environment and the interface with commercial agriculture.

She became an expert in the sugar industry, with her book Ganna (“sugar cane” in Hindi) bringing together a collection of articles analyzing most problem areas in the sugar cane and milling industries, including detailed analysis of the productivity (or rather the lack of it) in the cane farms and sugar mills.

She has worked for, and developed solid reputations with international scientific research organizations like ABARE, IUCN and CSIRO.

She was deemed good enough in 2008 to be the Chief Guest at USP’s medal awards ceremony, conducted under the current Vice-Chancellor.

She also recently applied for a professorial position at USP in her field, and was denied an appointment for unstated reasons, despite being a regional person eminently qualified for that position.

She and her husband bought a house in Suva, intending to spend more time and work in Fiji and the Pacific.

Unlike her abrasive, undiplomatic and politically incorrect older brother, she networked widely and contributed in many fields.

She served on the Gujarat Education Society Board; participated in the events of the Rajput Society (thedhobis) of which she and I are part; she was a Rotarian; and goodness knows what else she threw her abundant energy at.

She was an ideal peaceful decent law-abiding citizen and resident of Fiji, far more than the myriads of foreigners who have been welcomed in Fiji by the Bainimarama Government.

Yet Dr Padma Lal has been banned from entering Fiji, for no other reason than that she was married to Professor Brij Lal.

This academic, armed only with her laptop and spreadsheets analyzing the productivity of the sugar industry or the economic value of some marine environment, was deemed by the Minister for Home Affairs and former RFMF officer Timoci Natuva, to be dangerous for the security of Fiji.

Questions were asked in parliament, with totally unconvincing answers being given as the cause for the banning, other than that it was a “collective” decision coming from the Prime Minister’s Office, they had the “right” to make the decision, and the decision was final.

There is no comparison to be made between Dr Padma Lal’s talents and contributions to Fiji, with those of the individuals who made the decision to ban her.

So why have the institutions been silent?

The quiet institutions
The management of the University of the South Pacific, of which Dr Padma Lal is undoubtedly one of the luminaries, both as a student and academic, said not a word in protest, and neither did the Staff Association.

Neither did any of the other Fiji universities utter a word of protest.

The Fiji Association of Women Graduates said not a word.

The sugar industry organizations who all stood to benefit from Padma’s work said not a word.

The Fiji Women’s Rights Movement and the Women’s Crisis Centre, both led by CEOs who were both junior to Dr Padma Lal and know her extremely well, both professionally and socially, said not a word.

The Gujarat Education Society and the Rajput Society said not a word in protest.

The CCF said nothing.

The Rotary Club said nothing.

The Law Society, perhaps not concerned about what happens to foreigners even if they are distinguished former citizens making great contributions to the country of their birth, said nothing. But neither are they particularly concerned about the lack of justice for their own fellow citizens.

What is going on?

Not lack of ethics or morals

It would be too easy and wrong to accuse all the individuals who are heads of these organizations of personal cowardice or lack of morals and ethical principles.

I know that most (not all) of the individuals concerned are upright law-abiding moral citizens.

Should any friend or relative suffer a death in the family, they will be there to share grief, just as they gladly share the joy at births and weddings.

So how explain the institutional silence at the injustice against Dr Padma Lal, which is so blatant and clear-cut that not even the Government propaganda outlets have supported her banning.

How explain that collectively, the institutions they lead, have demonstrated for the last nine years, a horrible silence in the face of so many injustices to individuals in government and public enterprises.

One can only conclude that despite the election of a parliament, there continues a culture of intimidation, fear and silence, even when individuals in our society are blatantly denied their basic human rights, including the right to visit Fiji, or even the right to life.

This does not bode well for Fiji’s future.

First they came for the Socialists, and I did not speak out—
Because I was not a Socialist.

Then they came for the Jews, and I did not speak out—
Because I was not a Jew.

Then they came for me—and there was no one left to speak for me.
Published by Coup fourpointfive at 4:13 PM 131 comments:
Posted by Peceli and Wendy's Blog at 4:04 PM