Good on you Tupou

An article in today's Fiji Times concerning the Federation Party is that the Government is not listening to anyone from the Opposition Party who puts forward a good idea.

THE three-member National Federation Party (NFP) parliamentary board has taken the issue of their continued participation in Parliament to the party's working committee to make the final decision.
The party has accused the Government's "dictatorial attitude and outright rejection of bipartisanship to advance the social and economic livelihood of our people" as the reason behind this move, which it said spelt doom for Fiji's future. 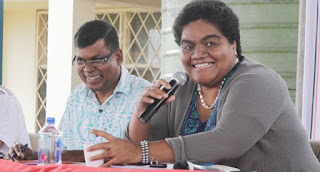 The committee, chaired by party president and MP Roko Tupou Draunidalo, sits at month-end, a week away from the commencement of the 2016 Parliament session on February 8. NFP leader and Opposition MP Professor Biman Prasad said they (with MPs Roko Tupou and Prem Singh) discussed the issue and agreed to bring it before the committee.

He said the committee would deliberate on a report from the party leader on the effectiveness of parliamentary democracy since October 2014. "Pro-people motions are defeated by Government using its numerical superiority. FijiFirst will simply oppose any motion by the Opposition, no matter how credible and logical it is. This is the sad reality," Prof Prasad said.

Yet, the Government saw it fit to allocate $9m for the Fiji International Golf Tournament and $18m for Fiji Airways to promote the upcoming Singapore service; and $11.3m to Fiji Broadcasting Corporation for public service broadcasting, said Prof Biman.

With this year's parliamentary calendar ending in September there are only four one-week sittings which equates to 20 days. "On each of these days, the Opposition is allowed to ask only three questions while three are allocated to Government. And Opposition business only takes precedence on Fridays when Parliament sits for only three hours from 9.30am to 12.30pm."

Government whip Ashneel Sudhakar said Prof Biman's comments were unfortunate and that he chose to turn a blind eye to the bipartisan approach taken by the Government in various sectors. He said Government's bipartisan approach was evident in the various Parliamentary Standing Committees that had seen some laws made in the country. "His claims of 'Government's dictatorial attitude and outright rejection of bipartisanship to advance the social and economic livelihood of our people cannot be further from the truth," Mr Sudhakar said, citing Government's various policies targeted at advancing the rights of all Fijians.

Speaker of Parliament Dr Jiko Luveni said where Government had an overwhelming majority, they would always win the votes. "The only thing I can say is it is experienced worldwide where a Parliament and where a Government has an overwhelming majority, they will always win the vote and that has to be accepted by the Opposition," Dr Luveni said. "So they (Opposition) need to accept it and move forward with that in mind. That's all I can say to them. And all the other issues are political and I am not able to comment on that."