News sources say that the Fijian soldiers captured in the Golan Heights have been freed. This will bring huge relief to the people of Fiji, praying for their safety. Perhaps it will swing the election results one way also?  For a video of the release and freedom, go to a video posted on facebook.  https://www.facebook.com/video.php?v=749402045118437 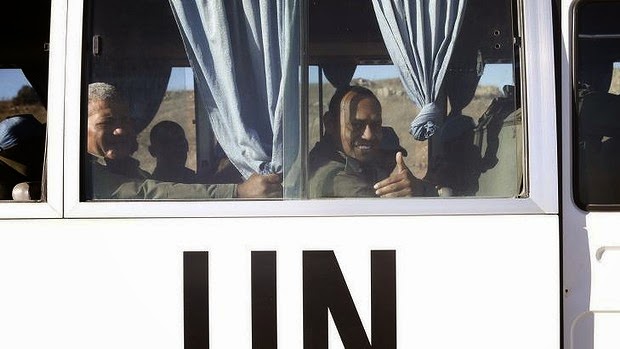 UN: Syrian Rebels Free 45 Fijian Peacekeepers
BEIRUT — Sep 11, 2014, 11:00 AM ET
By RYAN LUCAS and EDITH LEDERER Associated Press
Al-Qaida-linked Syrian rebels on Thursday released all 45 Fijian peacekeepers they had held captive for two weeks, the United Nations said, bringing an end to a crisis that had pulled the U.N. monitoring force into the chaos of Syria's civil war.
Fighters from the Nusra Front captured the Fijian troops late last month in the Golan Heights, where a 1,200-strong U.N. force patrols the disputed buffer zone between Syria and Israel. The area along the frontier has been engulfed in heavy clashes since then between the rebels and the Syrian military.
The Fijians were taken hostage the same day that nearly 80 Filipino peacekeepers were surrounded and trapped by Syrian opposition fighters. The crisis raised questions about the future of the U.N. Golan mission as participating nations threatened to pull their troops out because of the escalating violence.
Two weeks to the day after the Fijians were abducted, U.N. Deputy Spokesman Farhan Haq said Thursday that they had been freed. He said they were released at the Quneitra crossing point in the Syrian-controlled part of the Golan Heights.
The U.N. said in a separate statement that all 45 peacekeepers "are in good condition" and will be taken for a quick medical assessment.
Israel's Channel Two news reported that the freed Fijians were given food and medical attention after crossing into Israeli-controlled territory.
An unidentified member of the group expressed relief to have left Syria.
"We're all very happy to be safe and alive," he told the Israeli channel.
The Fijian troops were captured on Aug. 28, one day after rebels seized control of the Syrian side of the Quneitra crossing from President Bashar Assad's troops.
The same day the Fijians were taken captive, two groups of Filipino peacekeepers were trapped at separate U.N. encampments, surrounded by rebel fighters who demanded they surrender. They refused, and both groups of Philippine troops eventually escaped — one busting out with the help of Irish colleagues, and the other by slipping away under the cover of darkness.
The U.N. mission in the Golan Heights was established in 1974, a year after the Arab-Israeli war. Israel captured the Golan Heights from Syria in 1967, and Syria has demanded the return of the land in past peace talks.
For nearly four decades, the U.N. monitors helped enforce a stable truce between Israel and Syria, but the Golan Heights has increasingly become a battlefield in Syria's civil war.
The mission currently has troops from six countries: Fiji, India, Ireland, Nepal, Netherlands and the Philippines. A number of countries have withdrawn their peacekeepers due to the fighting between rebels and Syrian troops along the frontier.
The Fijians' release comes just hours after the Nusra Front posted a video online in which the captive peacekeepers can be seen sitting cross-legged in the background as two men with long beards deliver short speeches in Arabic. Near the end of the video, one of the Fijian soldiers addresses the camera in English. He says the date is Sept. 9 and it's a "very happy day."
"We've been informed that we will be released soon, and we are all very happy to be going home," he says, adding that all the soldiers are alive and well.
"I would like to assure you that we have not been harmed in any way," he says, adding that they have been treated well by the Nusra Front, given that the group has limited resources.
Posted by Peceli and Wendy's Blog at 8:14 AM

This is the LORD's doing and it is marvellous in our eyes. And now other things can be attended to - the review by the UN of the UNDOF mission

- God is not always correct

What a relief for the families of the soldiers! What brought about the turnaround because it looked bleak a week ago? The power of prayer? The care of the negotiators? The patience and discipline of the Fijian soldiers? Perhaps they did sing hymns in that 'strange land' and inspire their captors.