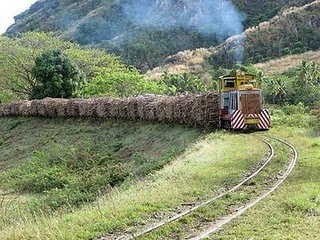 from w
A familiar sight of the small sugar cane trains running around the Labasa district might be no more. Instead there would be more trucks on the already busy roads. Farmers are not happy it seems.
from Fiji FBC
Farmers concern over railway closure
Thursday, January 20, 2011

National Farmers Union president – Surendra Lal says farmers who completely rely on the rail system will suffer as poor farmers will not be able to afford the lorry costs.

The FSC says they are looking at various options at the moment, and no decision has been made.
Posted by Peceli and Wendy's Blog at 1:05 PM

Gosh, there is a great deal of worthwhile material above!