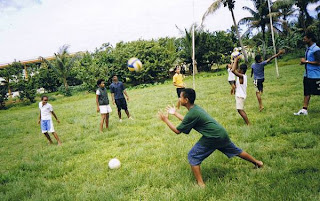 from w
In Fiji schools three subjects are put on the periphery of the basic syllabus for Fiji's schools and it's such a pity as Art, Physical Education and Music add a balance to the emphasis on rote learning, English, Maths, etc. In fact a very long time ago I taught Art, Physical Education (okay that sounds pathetic for this lazy one) and Music in high schools. Apparently the teachers in training at Nasinu prepare for these subjects but in the real situation, Art, Music and Physical Education don't rate highly. IMHO they are the top three subjects because they offer the potential for alternative career choices to white collar jobs or farming. All important in the emotional, physical and social development of children. Three articles in the Fiji Sun picked up the topic.

PEMAC is the acronym in Fiji for a department in the Fiji school system. The acronym [PEMAC]stands for Physical Education, Music and Art & Craft. The department's role is to promote the PEMAC subjects.

MASTER’S TOUCH
seraj@fijisun.com.fj
10/15/2009
Two years of artwork and handiwork of art student teachers were on display for the public yesterday. The Fiji College of Advanced Education yesterday opened its doors to members of the public to showcase the work of PEMAC second year students.
PEMAC students study Physical Education, Music and Art and Craft, majoring in usually two out of the three courses. These students are expected to graduate at the end of the year after two years of studies.

Iliesa Namosimalua is a PEMAC student at the College. His display corner seemed to be one of the popular ones. The Lau native showcased his artwork and handiwork in the two years of studies at FCAE. His art ranged from wood carving to coconut carving, water colour to oil painting, tie dying to screen printing. The student teacher is looking forward to passing on what he has learnt to his students once he enters the main education system.

Mr Namosimalua, a national sprinter is studying PE and Music at the College. As a requirement he took on Art and Craft studies and has become hooked. “My initial interest was PE but Art was part of the PE course. Once I developed an enjoyment for art I have learnt plenty of good skills,” he said. Most of the skills Mr Namosimalua came to learn from his teachers. He is also skilled in weaving. “We learn weaving as well, as you can see from my displays. We only see our grandmothers back in the village weaving, since taking up this course I have also learnt how to do this,” he said. He has also mastered the art of origami."Origami is the traditional Japanese art of paper folding. The goal of this art is to create a representation of an object using geometric folds and crease patterns preferably without gluing or cutting the paper, and using only one piece of paper. “When a volunteer came to the school some time ago, we were taught origami,” he said.

Another second year PEMAC student Pratik Kumar had an interesting design work. He has mastered the making of batik fabric. ccording to the Wikipedia, batik is cloth which traditionally uses a manual wax-resist dyeing technique. Mr Kumar gave the FijiSUN a rundown of how to make batik. “First you make your design, then heat candle wax and apply on design and live it there for it to dry. When it is dry dip the fabric into the dye then hang it out to dry. After it is dry place a newsprint sheet on the floor/table then put the fabric on it, cover the fabric with another newsprint sheet. After this iron over the newsprint.In this way the excess wax will stick to the newsprints and your batik fabric is ready to be sewn into whatever clothing one wishes.” Mr Kumar said art is interesting and fulfilling, especially when the end product is revealed.

As the showcase went on several teachers at the College and members of the public approached Mr Namosimalua’s display corner to buy some of his art work. However, most of his art work will also be taken with him to show his students once he takes up teaching duties. He said the skills he has learnt from his teachers at Nasinu will help him a lot when he joins the teaching system.

Music motive ‘lacking’
11/24/2010
A survey revealed that some students studying music do not have basic knowledge of the subject. The survey was conducted by Fiji National University music lecturer Saula Naivalu. Mr Naivalu revealed students are not motivated to learn music. In his survey, Mr Naivalu states that in his first semester in the Music Department at the Fiji National University, many music students did not have the basic knowledge of music.

"One of the main concerns I encountered in the teaching of music among the year one students of the Fiji National University (FNU) was their difficulty in reading and understanding music theory," he said. So in his bid to see that students at lower levels contribute efficiently to the music industry he conducted a survey to see how schools offered their music classes. Mr Naivalu said in the process he was able to identify schools that were actively offering music classes and explored with the heads of department (HOD), principals and management how music is taught in their schools.

He also made recommendations on how to improve the teaching of music in secondary schools and also identify the causes of problems encountered by the schools. With the 12 schools he visited, Mr Naivalu was trying to find out the effectiveness of music teaching in the Secondary School.While visiting these schools, Mr Naivalu noted that only one period per week was allocated for music class by all schools. He discovered that most schools did not have specialist music teachers.

Schools need to do sports
11/25/2010
“Quality education is an investment to our country therefore schools, teachers as well students should be better equipped in learning and teaching resources in order to become real agents of change.” Speaking at a panel discussion on sports education, researcher Fabiano Tikoinavuso said at times students were deprived from participating in sports due to financial problems. “About 5 percent of government grant is allocated towards the development of physical education. Schools have to fundraise to cater for the financial needs of the Physical Education department.”

Mr Tikoinavuso, who once carried out a survey of the allocation of funding towards the development of physical education and sports in the country, said the majority of the schools do not have the required teaching and learning resources for physical education. “Schools have very tight budgets, therefore if a particular subject is treated as unimportant, minimal amounts are spent on it.” He added that in some schools the playgrounds were not up to standard and the same can be said of the equipment used for PE classes. “It’s just a pure testimony to the small amount spent in this area. I strongly feel that nothing has been done to remedy this situation,” he said.

Some of the recommendations highlighted in his research were:
1. Increase per capita grant from 10% to 15%.
2. Core subject like sports be given the same priority as academic subjects as far as grants is concerned.
3. Students and sports should not be at any time compromised due to unavailability of funds.
4. Students are not to be used outside of the school premises to fundraise. The number of fundraising drives should be determined by the policy makers of the day.
5. Government should assist in supplying the required learning and teaching resources for Physical Education and Sports financially.
6. Principals and HOD’s should have the rights to be informed of the financial statement of the sports department. (Transparency)
7. Fair distribution of Pemac teachers in all secondary schools in the country.
The three- day conference was held at the Fiji National University Lautoka Campus.

I found an interesting website about physical education in Fiji Schools - it's based on an academic study of the topic worth a read.
Posted by Peceli and Wendy's Blog at 4:13 PM

NICE BLOG!!! Education is the process of bringing desirable change into the behavior of human beings. It can also be defined as the “Process of imparting or acquiring knowledge or habits through instruction or study”. Thanks for sharing a nice information.
Top MBA Colleges in India
Best MBA Colleges in India