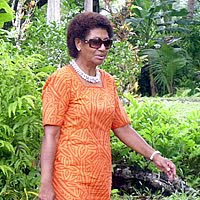 Almost a year and a half ago there was a to-do about the planning of the Methodist Conference for August 2009 and charges laid against several talatala and a high chief, the Marama Roko Tui Dreketi. Well, the charges against the high chief have been dropped.
from Fiji Village journalist writes:
Charges withdrawn against Kepa
Publish date/time: 08/09/2010 [17:02]
The Office of the Director of Public Prosecutions has withdrawn the charge of conspiracy to disobey an unlawful command, faced by the Marama Roko Tui Dreketi, Ro Teimumu Kepa. Official sources at the DPP's Office have confirmed that the charge was dropped on Monday.

Ro Teimumu had initially pleaded not guilty to the charge.

For the one count that Ro Teimumu was charged with, it was alleged that last year between July 12th and July 29th, Ro Teimumu conspired with Methodist Church Ministers to host the annual Methodist conference in Lomanikoro in Rewa even though a directive was given by the Prime Minister Commodore Voreqe Bainimarama not to hold the conference.

She will not face any charges now in relation to this.

However it has been confirmed that the charges against the Methodist Church ministers and officials still stand.

Story by: Paradise Tabucala.
Posted by Peceli and Wendy's Blog at 11:14 PM