from w
After some speculation that the Fiji Sun guys were interested, this morning one small item hinted that the Motibhai Group would be buying the Fiji Times. This afternoon it became official and the story has been posted on various media outlets, including some from Australia.

Update: 4:45PM THE Fiji Times has been sold for an undisclosed sum by News Limited to the Motibhai Group. In a statement this afternoon, News CEO John Hartigan said an agreement had been reached for the sale of Pacific Publications (Fiji) Limited.

The sale is subject to final regulatory approval in Fiji with the expected closing date for the sale on September 22, Mr Hartigan said.

Under the Media decree News Limited was given until September 28 to sell at least 90 per cent of the Fiji Times or face closure.

Motibhai CEO, Mahendra Patel, said his company was delighted to have been successful in its bid.

We will continue to ensure that the Fiji Times is the preferred daily newspaper by the vast majority of Fijis population and live by the adage that the day is not complete until you have read the Fiji Times, he said. 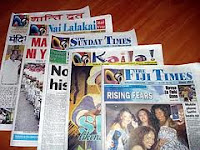