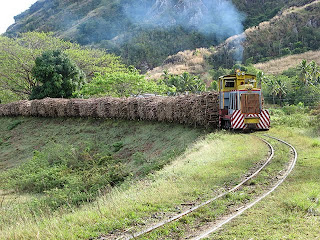 from w
Almost every day there is news in the Fiji media of yet another mill breakdown or the difficulties for cane farmers, some having to feed cane-cutters while they wait for news to cut more cane. It's not a money-making business as costs are very high when compared with the income. There was even a story that sugar was short in the shops in Labasa. Now that surely is ironic. We are familiar with sugar cane farming as several members of our family have cane farms and also we have lived in Labasa, Lautoka and Rakiraki - all sugar mill towns. These days though there is an urgent need for people on the land to diversify. 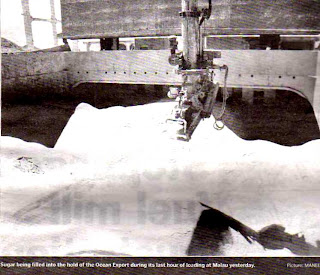 Here's what was written on the Fiji Labour Party website recently.

The grim state of the sugar mills
[posted 6 Sep 2010,1530]
Crushing last week virtually halted at all four sugar mills while loaded cane trucks piled up at the mill gates - and the quality of cane in the fields deteriorates every day under prolonged drought conditions.

In Labasa, 30,000 tonnes of harvested cane is lying in the fields. The mill broke down Monday week (August 30) but FSC continued to issue harvest quotas throughout the week until Friday. FSC has not said when the mill will resume crushing again. Nor is it releasing any information to growers regarding the stoppage.

Penang: the mill was out all last week. It began steaming this morning with the expectation that the machines will start rolling later today. Crushing stopped eight days ago on 29 August as a result of boiler problems which have persisted since the start of crush.

Lorries that queued up outside the mill, were told Friday that crushing will resume on Monday, September 6. Lorries were not initially allowed to offload in the stock pile bay even though the facility is intended for such contingencies.

Rarawai: mill has been down for most of the week – it stopped on 31 August with crushing expected to resume today at 3pm.

Lautoka: the mill has been crushing intermittently on a stop/start basis
The situation is simply untenable for cane growers who are losing heavily financially as a result of the stoppages. Their plight is further aggravated by the continuing drought as the standing cane in the fields dry up and lose weight.

The crop size for the 2010 season has already been revised to 1.8 million tonnes due to the prolonged drought. With the dismal performance of the four mills, the average TCTS ratio is more likely to be 14:1 by season’s end. At this rate, FSC sources say, they would be lucky to make 125,000 tonnes of sugar for 2010 – the lowest ever in the industry’s history and almost 40,000 tonnes below the much reduced 2009 production.

Based on these figures and the depreciating Euro, farmers may receive less than the already low forecast price of $45 per tonne of cane. This will hardly meet their costs of production, harvesting and transportation and may force many of them to exit the industry to concentrate on other better paying agricultural pursuits.

At this critical juncture, it is patently clear that the current administration has no idea how to address the fast deteriorating position of the industry. In two years, it has brought the industry to the verge of collapse. Under the guise of de-politicising the industry, it has played its own brand of politics and tinkered with key industry institutions which held FSC to accountability.

The situation is now extremely grave not only for the farmers and the landowners, but for the entire nation which is still dependent on the sugar dollar for its economic health. It is also sad news for the 20% of the population – 200,000 people - who still depend, directly or indirectly, on the sugar industry for their livelihood.

What is the solution?

The FSC chairman who lapped up the good life living in the lap of luxury in the past two years has departed. Growers’ organisations have called for the resignation of the entire FSC board which should take responsibility for the current state of the mills.

We now call on the Sugar Minister to step down as he has failed miserably to provide any leadership or guidance at this critical juncture of the industry’s history. But that alone will not resolve the issue. There is no other way but for Fiji to re-establish good relations with the international community in order to access the funds needed to revitalise the sugar industry. This means a return to democracy.

Some of the EU assistance of around $400 million for the industry has been lost but we can still save the day and access whatever is remaining from the 2010-2013 allocations. But that would require engaging with them and the international community generally to work out an acceptable road map back to constitutional rule.
Let us not delude ourselves with talks of reforms etc. The only way Fiji can save its economy is by restoring democratic and constitutional rule.

If the sugar industry collapses, the consequences for the nation will be dire indeed! Trumped up figures on the economy will not be able to save the day.
------
and from FBC website this evening:
Fiji mill upgrade a failure: Commissioner
Monday, September 13, 2010

Taken from / By: Google
Mill upgrade works carried out at the Lautoka, Labasa and Rarawai sugar mills by vendors from India has been a failure says the Commissioner Western Commander Joeli Cawaki.

Cawaki is the first government official to make the statement.

Cawaki told FBC News in Lautoka that the upgrade work was to have increased production and improve milling efficiencies but this has not happened.

"The mill upgrade - for me - is a failure. It's supposed to be a success but it's a failure. We are not getting the TCTS that is supposed to improve it but on the other hand the performance is poor."

Cawaki who is also chairman of the Committee for the Better Utilisation of Land or CBUL and who also chairs the sugar industry stakeholders meeting says there has been too much crushing disruptions at the mill.

"For me as the chairman of the CBUL committee of the western division we have done everything we could do to acquire land, to go down to the farmers and for the farmers to produce what is needed, but unfortunately the sad story about the sugar industry is the mill that is not performing and this year the forecast price of $45 dollars is pegged at 10. 5 TCTS but the TCTS is over 13 at the moment. I don’t think the farmers will get their money out of the forecast price as it happened last year."

Cawaki says the NLTB renewed 54 land leases in the Nadi and Lautoka area for new farmers to come into the sugar industry this year.

Unfortunately due to the poor mill performance - he says it is not encouraging for these farmers to go into the sugar industry.
Posted by Peceli and Wendy's Blog at 4:15 PM