from w.
Both Kia and Kioa are islands off the coast of Vanua Levu but they are quite different. Kia is west of Mali, offshore from Macuata and the people are traditional fishermen and women and Kioa is off Cakaudrove next to Rabi Island and the people migrated from Tuvalu many years ago. Kioa is an outlier to Vanua Levu, situated opposite Buca Bay, Kioa is a freehold by settlers from Tuvalu, who came between 1947 and 1983. Kioa is one of two islands in Fiji populated by South Sea Islanders, the other being Rabi, also in the Vanua Levu Group and home to a displaced Banaban community. The people of Kioa have a very good website. 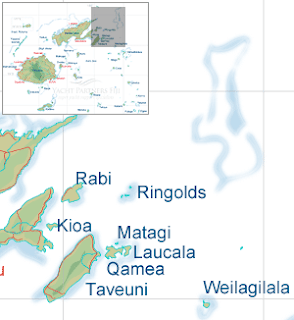 Some of the youth from Kioa are in the Labasa area this week. So here is more 'soft' news from one of the Fiji papers.
From Fiji Sun
Rally unites North youths
6/16/2010 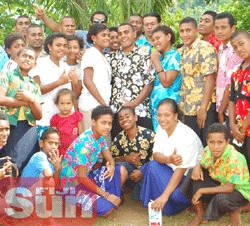 A multiracial youth rally was organised by the Kioa Island Youth Group in Vunivau, Labasa, last weekend. With the launching of Labasa crime-free town in the next few days, the group decided to have the rally to promote unity. It was attended by Tuvaluan youths from different communities, Banabans and itaukei.

The youths were from Vunivau and surrounding areas. They performed religious items, chorus singing, drama, cultural and island dances. It was a one-day event and a volleyball competition was organised in the afternoon.

Kioa group member, Lawrence Nikotemo, said it was the first time such a combined youth rally was held. “The rally is to create awareness among youths about the declaration of crime-free event,” he said.
Posted by Peceli and Wendy's Blog at 5:17 PM

Well, I don't really think it will work.