from w
In Labasa with the mix of cultures, there are often religious celebrations, and two took place in the past week. Diversity is acceptable in such a multicultural society. Here are two stories from the Fiji Times today. 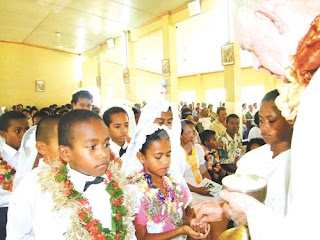 Father John Joseph Ryan urged the children never to forget the day they first received Holy Communion which is an important day in their lives. "The church is the body of Christ and the church celebrates this in the Eucharist," he said. "The Eucharist is a meal in which we remember what Christ is and what he did when he gave up his life and was resurrected. That is remembered in the Eucharist so for the first time today these children are receiving the fullness of Christ." The children were prepared over several weeks to understand the importance of Holy Communion. "From now on they must show the face of Christ, compassionate love, mercy, goodness, kindness in the way they live and behave," he said.

And the second story from the Fiji Times today:

Act of submission to the Gods
Theresa Ralogaivau
Monday, June 07, 2010 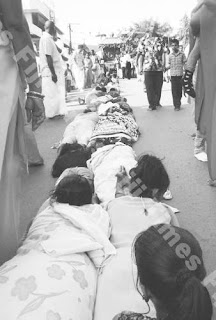 Hundreds of believers lie face down on the streets of Labasa in the annual procession of 'Ratha Yatra'
HUNDREDS of Hindu devotees braved the scorching sun and burning tarsealed road lying face down along the main street of Labasa in an act of total submission as the chariot of Lord Venkateshwara and goddess Lakshmi passed over them. They believed once the chariot passed over all their sins would be washed away. The annual procession of Ratha Yatra always attracts thousands, those that are fascinated by the long line of believers face down along the street, songs, and dances to the beat of the melam and the musical sahanai aside from the worshippers themselves.

Rajesh Guruji explained the Ratha Yatra procession is part of the Festival of Brahamotsavam. The Ratha Yatra procession begins from the Sangam Temple where the deities are taken out and placed on a chariot and travels through town before returning to the temple. "When the chariot passes over the devotees I sprinkle a mixture of flour and turmeric powder over them to cleanse them," he said."We go through town so that everyone receives blessings. Lying face down is an act of total submission to the deities, offering themselves to the gods and whatever sins they have committed so that they can be renewed."
Posted by Peceli and Wendy's Blog at 3:00 PM