from w
The music 'Barcarolle' is playing on SBS TV and reminds me of the soft times when our children were little and life was carefree. Many years ago, June 4th, at Ba hospital in Fiji a bright little baby boy was born, the delight of his parents. Two more boys added to the family. Enough said, I don't want to embarrass the young man. 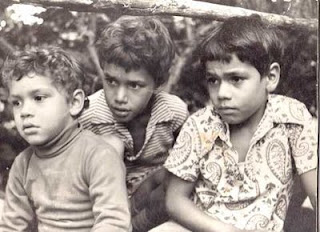 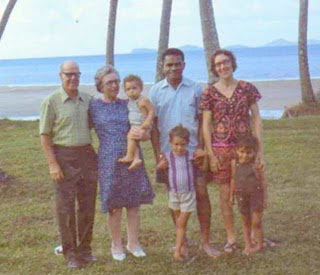 One of the photos was taken at Nukutatava when it was like a park, when Papa and Mama were visiting.

However today I was thinking of Rakiraki and the three years we had there in the late 60s. While watching a very dark film about Sylvia Plath on TV this afternoon, I decided to write a poem and realized that my life has been mainly sunlight, not shadows.

It was a different country then
below the Kauvadra,
our cement block manse
coloured aqua, pink,orange.

Outside two piglets rooted
under a broad mango tree,
Kanakana and Lesumai.
A near-blind woman brought
cassava peelings for them
and then yarned with Nau
over sweet tea and pancakes.

The pretty girl from across the road,
her hands painted with henna
married with a rainbow splendour
under the shining canopy.

The village next door blessed us
with jokes and stories
the rooftops of reed,
the walls of plaited bamboo.

Our first child was a gift
then another son soon after.
Amidst sugarcane fields
dotted with houses of tin and dung,
the farmers with little money
offered gulagula and spiced tea
as our babies slept,
one in a cradle of sugar bags.

But there was a march one day
with ominous hand-painted banners,
men as warriors, faces blackened.
I didn't think much of it then,
that year before independence.

To me it was all sunlight
without a hint of shadows,
it was a different country then.

Posted by Peceli and Wendy's Blog at 3:14 PM