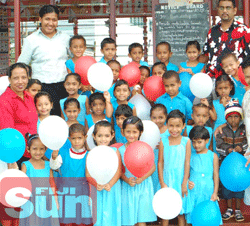 from w
I just wonder what is the connection between balloons and Crime Free Labasa? I wonder if the balloons lasted until the little kiddies reached their homes.
From today's Fiji Sun
Free balloons for kids
6/24/2010
Students of the Labasa Jesses Play Centre Kindergarten received colourful balloons from the Labasa crime-free zone one committee yesterday. The kindergarten has a roll of 47 students.

Kindergarten teacher, Jotika Dutt, thanked the committee for its donation. She said their students did not attend the event at Subrail Park last week because of heavy rain.

Five-year-old, Rani Shivran was among students who received balloons.
“I will take the balloon home and explained to my parents what the Labasa crime-free declaration is all about,” Shivran said.
Posted by Peceli and Wendy's Blog at 2:26 PM