Tonga at the Olympics

Introducing the Tonga flagbearer who glistened during Rio Opening Ceremony

(Photo: Matt Slocum, AP)
RIO DE JANEIRO -- Tonga is mostly an overlooked country at the Olympics, with a rather small delegation and just one medal in its entire history, a silver back in 1996.
But it provided perhaps the most memorable moment of the Parade of Nations on Friday when its flag-bearer came out bare-chested and dressed in nothing but a ta’ovala (Tongan mat) wrapped around his waist and copious amounts of oil on his torso. ​Rio is a city that has never been shy about celebrating the human form and Taufatofua’s appearance was greeted with loud roars of approval.
Who is the mystery man?
After his star turn on Friday, he won’t be a secret for long.
It’s Pita Nikolas Taufatofua, who qualified for the Olympics through the Oceania Takwondo qualification tournament in April. The 32-year old had fallen short in his two previous attempts to make the Olympics. Very little else has been written about Taufatofua, but a Web page on generosity.com to raise money for his training indicates that he “sacrificed his whole adult life working in homeless shelters with the underprivileged.”
He raised $6,262 dollars in four months.

USA TODAY
Why U.S. Olympic team was introduced earlier than usual at opening ceremony
According to his official biography, he was born in Australia but chose to compete for Tonga because of his father's heritage.  He lives and trains in Auckland, New Zealand.
Tonga, a Pacific Island (pop. 105,000), has just seven athletes competing in Rio. 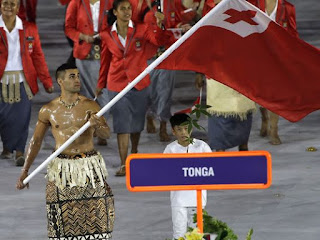 USA TODAY
USA flagbearer Michael Phelps leads team into Olympics opening ceremony
USA TODAY Sports reached Taufatofau’s friend Jacinta Sitapa by telephone from her home in New Zealand just moments after the Tonga team paraded on the infield.
Sitapa revealed that the idea to wear Tongan national dress, the concept of which dates back hundreds of years, had been Taufatofua’s idea alone.
“This is the first time Tonga has done something like that,” Sitapa said. “It was important to Pita. He is very patriotic and loves Tongan culture. He didn’t know if he was going to be picked to carry the flag, but if he did he strongly felt that it should be something that represented the country."
Posted by Peceli and Wendy's Blog at 8:18 PM

Actually the costume wasn't the best Tongan dress as the proper thing to do is to wear a ta'ovala (mat) as a waistband over ordinary clothes. This one had a brief kind of ta'ovala more like a girl's kiakia and a kind of tapa cloth skirt which is more like a dance costume.