A new name for the Indian Division 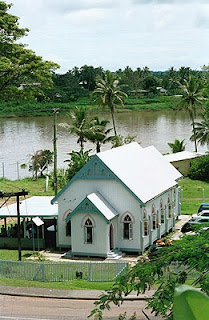 Again there has been a request at the Methodist Conference that the Indian Division change its name because it doesn't really show the nature of memberships which is much more inclusive of various cultural groups in Fiji.
from the Fiji news: http://fijivillage.com/news/Calls-made-to-change-race-based-name--rs529k/
Calls made to change race based name 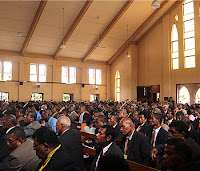 Delegates of the Methodist Church conference at Centenary Church in Suva.

Calls have been made by the Indian Division of the Methodist Church in Fiji to change its name since it is a race based name for the division.
This motion was moved by the Indian Division of the church at their Annual Conference at Centenary Church.
Church Secretary for Communications, Reverend James Bhagwan says the motion has been referred to the committee at the conference to discuss the appropriateness of the changing of the name.
Reverend Bhagwan says they will need to think of an appropriate name and change it if it needs to be done.
Fijivillage has raised this issue in the past on why the Methodist Church continues to have an Indian Division for its church as it is based on race.
People from other ethnic backgrounds also attend these churches.
Earlier statements from the church had said that the community wanted to stick to the name.
However this division has made it clear at this year’s church conference that they do not want a race based name.
Meanwhile the overall membership of the Methodist Church in Fiji continues to drop.
It has been released in its 2016 Statistics Report that 3,554 members left the church in the last 12 months.
The church membership recorded so far for 2016 is 198,610.
There were 202,164 members of the Methodist Church in 2015.
Members joining other Christian denominations continue to be the main reason for the decline in membership.
Another reason is the inability of elderly members who have no source of income to meet the financial requirements under the levy system.


The Methodist Church Annual Conference will end on Friday.

Posted by Peceli and Wendy's Blog at 2:08 PM