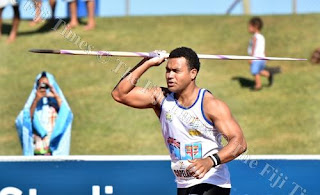 Excellent news for Copeland as he will represent Fiji in the javelin event at Rio. He's a great sportsman doing very well. Copeland in good form for medal in Rio. The jav is our favourite event because Andrew was in the Fiji squad for a few years as a javelin thrower.
Shalveen Chand
Sunday, July 31, 2016
Leslie Copeland in action at the 2016 Melanesian Games at the ANZ Stadium last month. He is aiming for a medal at the Rio Olympics which begins in a few days.Picture: RAMA+ Enlarge this image
THIS is the perfect time to reflect on a true Fijian champion and probably the most successful national track and field athlete so far, Leslie Copeland.
He will be competing in the Olympic Games in Rio.
In 2006, The Fiji Times visited an 18-year old Leslie Copeland at his home in Lami as he was set to depart for China to compete in the IAAF (International Association of Athletics Federations) World Junior Championship. This was his third trip to an international meet after finishing high school.
This was the start of many good things to come including sponsorship deals making him the most successful track and field athlete in Fiji's history. Not only that, Copeland is rated among the top 20 in the men's javelin throw on the world stage.
That year, the headline read, "Copeland targets 70m". Ten years down the line, he throws 10 metres more and has an outside chance to sneak a medal home.
Remembering the day, Copeland smiled and said he still had the same enthusiasm 10 years ago but the desire to perform had increased.
"I was 18. It has been 10 years. I guess I am mature now. I wish I had the knowledge I have now back then," said Copeland before he departed for Brazil.
"I believed in myself, had family support, a great coach and good advisers. I am grateful to them for the support that has guided me so far.
"In 2012, I fell short but this time around I aim to make it."
In London, Copeland missed out on the final round after he finished 13th in the qualifiers, only the top 12 made it through.
Four years on, his throws are in the range to be in contention for a medal.
Athletics Fiji president Joe Rodan said Copeland could spring a surprise because he was well prepared.
Rodan said under the guidance of former Olympian and coach James Goulding, the national javelin record holder had what it took to win a medal.
"I believe he could be the surprise package," said Rodan.
"The gold medallist in the last Olympic threw just over 83m and Leslie is currently in that region.".
Posted by Peceli and Wendy's Blog at 3:09 AM