from w
In the Fiji Times today is a story of the launch of a new book - recipes and stories of Fiji by Lynette Mercer. Good on you Lynette.  Peceli knew the Tippett family in Davuilevu when Lynette was a youngster. Her father was the excellent teacher and theologian, Rev Dr Alan Tippett. 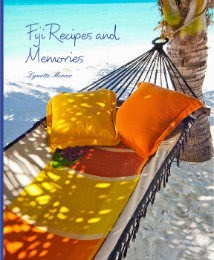 + Enlarge this image
Nostalgic ... Lynette Mercer with her new book Fiji Recipes and Memories. The book was launched at The Fiji Orchid on Thursday. Picture: SHAYAL DEVI
A 10-YEAR dream for 75-year-old Lynette Mercer culminated into reality on Thursday night when she launched her first cookbook at The Fiji Orchid in Lautoka.
A well-known figure in the tourism industry, Ms Mercer and her husband established the Kon Tiki Hotel, now known as Koro Sun Resort, on Vanua Levu in the 1970s.
The 267-page cookbook is titled Fiji Recipes and Memories and describes Ms Mercer's life in Fiji after she moved from Australia when she was two years old.
Having spent majority of her life in Cuvu, Kadavu and Davuilevu, she credits her book to all Fijians who encouraged her love of cooking meals with a unique Fijian flair.
Behind each recipe lies a delightful story, says Ms Mercer.
"For example, I put in a recipe for guava jelly," she said.
"I told the story about going to school in the bus, which used to break down. So, all the children would run out to get the guavas and the poor driver would be calling and we would still be climbing the guava tree."
Ms Mercer said it had taken about 10 years to get all the recipes together.
"So there are recipes and there are also stories for those people who want to read about the crazy things that we used to do as kids, like taking the boat out to go fishing and catch crabs."
According to Ms Mercer, all the recipes were simple and used only local ingredients.
"I just like food. I am not a dessert maker but I love simple things. I like making rourou and dhal soup and for ingredients, I like using onion, salt, pepper, chilli and Fiji lemon in my dishes."
Posted by Peceli and Wendy's Blog at 12:50 PM