from w
Good to see that one new parliamentarian is not nervous about speaking about sensitive issues such as the huge allocation of money in the budget for the military.  Vinaka Tupou.

Shadow Minister for Immigration, National Security and Defence, Tupou Draunidalo has questioned the need to allocate close to $200million to the military in the 2015 Budget, saying it will be better used to improve the livelihood of Fijians. She described the allocation as "unnecessary funding" and one that will "encourage them to believe that they are the final arbiters of fact and issues in national public life – that they know much better than the other Fijians, including all of us who speak through the ballot box.”

Draunidalo suggested the funding will be better utilised on "building more and better schools and hospitals, wages and     salaries for government nurses, teachers, doctors and all of the other civil servants, village nurses and turaga-ni-koro who perform important functions for the State". She said it could also be be used to reduce the country's debt that Fiji’s children and grandchildren will inherit and have to pay, or that it is diverted for job creation for the young people looking for jobs, health care equipment at hospitals, and give more funding for scholarships to young people. “Couldn’t we use all of the money diverted to the military to train our people inside and outside of the military for far better employment that does not include coup making or peacekeeping for the moral free zone which is the United Nations?”

Draunidalo said she does not take lightly her task on her views on the matter of national security and defence but one she does with a lot of love for the institutions, the country and all the people of Fiji.  Looking at past year’s budgets, Draunidalo said that the actual total expenditure for the Royal Fiji Military Forces for 1986 was  $16,518,000.60.
“In looking to learn from the past Madam Speaker, allow me to touch on the cost of coups  and the  steady “mission  creep” of military spending to emphasise the point  of past journey's and pathways. It is also the context in which the  2015 Budget, particularly military spending sits.” Draunidalo said. She said since 1986, the pre-coup year to the post coup years, military spending has continued to thrive. “By 2001, the year after 2000 coup, the RFMF's actual total expenditure was $79,346,000.50. 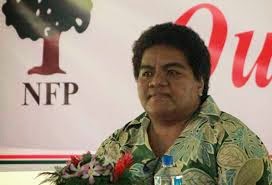 “By 2007, a year after the 2006 coup, the RFMF's actual total expenditure had catapulted into the $100m mark and total  actual expenditure was  pegged at $126,285,000.10. Draunidalo says what is more concerning about the allocation is the estimated cost is not presented as per the norm under one Head, but have been spread out across several Heads.

“The intent perhaps to hide the glaring burden on the nation’s coffers,” she said.

Draunidalo says her comments is a contribution to assist in moving the country forward. “I am confident that many men and women serving in our military will agree with having the hard discussion – as they too would appreciate up-skilling and alternative employment, they too use our government services and  they too have children and families who use public schools and young people in their families who expect and  want much better employment and other opportunities that the government can create the environment for– if only it had the extra few billions that coups have cost us – so too the hundreds of millions diverted to unnecessary military spending.”