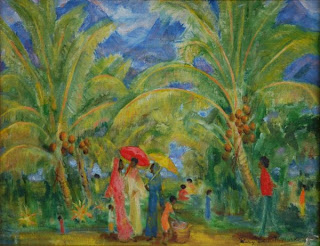 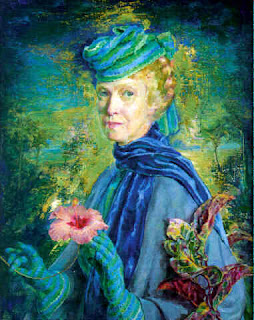 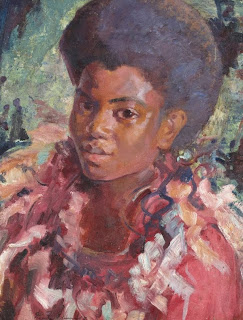 from w
An article in today's Fiji Times by Seona Smiles set me on the trail of an Australian artist who lived in Fiji from 1944 after a huge kerfuffle about the Archibald Art prize. She apparently died in 1988 and is buried at the Nasinu cemetery. There's something about Mary alright! Mary Edwards as she once was called, though dismissive of her early life when called Mary Edwards, she then called herself Mary Edwell-Burke after her father and mother. What an interesting woman - one of those loner vavalagi artists or writers who choose to live on a Pacific Island rejecting their own culture for some reason or other. Apparently she lived in a house on a hilltop in the Deuba region at one stage. One time she frightened children when they saw a 'ghost in white' in the middle of the mangroves - just an artist drawing - something that I may also have done! Another time she was mistaken for the 'white lady' ghost at the Royal Hotel in Levuka. (Apparently they have a resident ghost of a missionary's wife who did some transgression but I can't find out the whole story there.)

Mary painted in oils, mainly portraits in a kind of realist style but a bit painterly and colourful. When Dobell was awarded the Archibald in Australia with a lean/mean kind of portrayal of his friend, Mary and other artist were outraged and called it a caricature and went to court over it. Dobell defended the painting of course, and he won. That's when Mary took umbridge and probably had lost her money so set off for Fiji and lived for another 44 years as a colourful expatriate.

She wore white writes one contributor to the internet though a self-portrait has her in flamboyant colours. She apparently disliked children but loved cats. A retrospective of her paintings was put up at one time sponsored by Qantas and Air Pacific and Qantas claimed the rights to ALL the photos of the paintings because they gave her a free plane trip!

Two people - and maybe more - are trying to track down the paintings, especially the one of Ratu Sukuna that was in the Grand Pacific when it was grand - and to write an entry into the net about her, claiming she is much underrated. Qantas has a huge painting by her of Ratu Seru Cakobau - presumably this was copied from a photo. A google search of art sales today shows up prices for her paintings as ranging from only $300 to about $3000 though some suggest $5000, which is not much at all. I wonder if my paintings and drawings - in a few homes in Suva, or down the Coral Coast or elsewhere - will one day be offered for sale on the internet. Nah.

Anyway if you are interested there's a lot about her on two websites - one facebook even under her name and a blog called Travels with Denise in the January 2011 posts.
Posted by Peceli and Wendy's Blog at 10:32 PM

I remember her! I think that she used to march in all the Hibiscus Festival float parades. She used to wear this big hooped Victorian dress with a long train trailing behind her, which was carried by a couple of Fijian kids. She also had an umbrella made of the same materials as her dress and train. My father has several photographic slides of her taken at various parades over the years. Thanks for the memories!

Thanks to my dear departed friend "Mable" I have Esiteri doing a Meke 1957.Deainavesi Suva Fiji.

Very nice as Mary has captured the facial expression as the eyes of Esiteri follow me around the room at any angle. Bravo Mary Edwell-Burke.

Unknown said...
This comment has been removed by the author.
7:26 PM

Unknown said...
This comment has been removed by the author.
12:07 PM