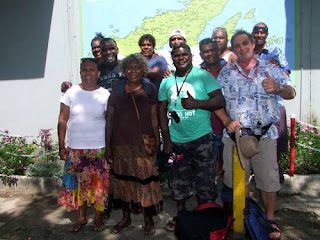 from w
Wnat a beaut idea to send a group of Aboriginal people to visit Fiji and get to know one of the South Pacific cultures. Though their stories and background are so different, there are some commonalities. Both Fijian and Australian Aboriginals are First Nation peoples and both have rich cultures. Over the years of working in Australia as a talatala Peceli has had a lot to do with the indigenous people, starting from his early contacts in Swan Hill, Robinvale and the Mallee and now in Geelong. They have a good relationship and many call him a 'brother'.

ABORIGINAL women Kay Bingham and Tracy Latukulikefu caught the eyes of Labasa residents as they sat on the street bench, oblivious to the commotion they were creating. Even The Fiji Times team was moved by their presence, seated as they were just 10 metres from the office ù so we approached and greeted them. The women seemed content, watching locals carry out what they were in town for. They mentioned their cultural exchange trip to Fiji; Cakaudrove was the starting point of the program.

Without any hesitation, the women said that they were enjoying the hospitality of the Fijian people. "The people here are so friendly and easy to talk to and we have just enjoyed the local environment in Taveuni, Savusavu and we look forward to the Viti Levu trip," said Mrs Latukulikefu. "We are here to learn more about the Fijian culture and get to know the various Fijian protocols, which we have.
"And it's just unique."

The group from Wiluna, North East of Perth came under the banner of Rotary International, Group Study Exchange. Team leader Hugh Lavery said the trip was the first for the Aboriginal community to Fiji. "This idea came up after some Fijians living and working with the community in Wiluna, discussed how good it would be," he said. "We have learnt a lot about the Fijian culture and we are learning more as we continue to visit villages and other places."

The group will visit some villages this week in Namosi, Ra and Wainibuka, Mr Lavery said. He said they would take a group of Fijian people to Wiluna (Australia) this year, in June.
Posted by Peceli and Wendy's Blog at 3:04 PM