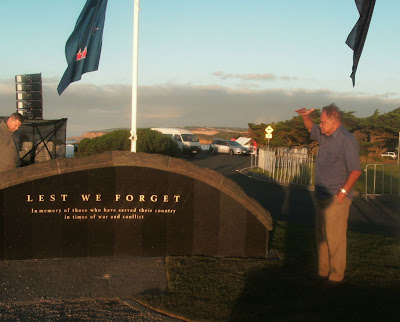 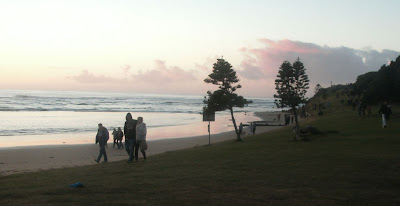 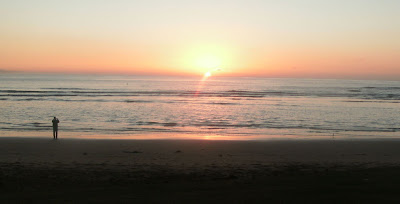 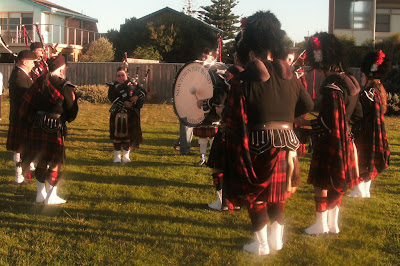 from W
This year Anzac Day was on Easter Monday and we spent a couple of days in a friend's holiday house at Torquay, a beautiful town with several beaches. A tradition in Torquay each year is for thousands of people to gather at the top of Point Danger to remember Gallipoli and many other tragedies of war. Our family got up early and went along but we didn't join the crowds for the whole service. It is a time to remember how dreadful war is, that solving problems by killing is not the answer, and to recall family who died as soldiers or victims of war. We watched the sun rise over the sea. Later we had sausages and coffee with the crowds of people and watched a Scottish pipe band playing.

The day before about sixteen of us at Geelong East had gathered overlooking Corio Bay to watch the sunrise to remember the resurrection of Jesus. We were not as quiet as reflective as we had planned because we were dancing and jumping because of the huge mosquitoes. The sun had also hid behind clouds and only rose when we turned our backs to drive home! Anyway Easter Day was a good day with a breakfast up at the church, a 9.30 a.m. service at which our grandson Jordan played excellently, then the kids had an easter egg hunt at a friend's house. In the afternoon we packed up and left for our short holiday. It's been a refreshing but busy week as usual.
Posted by Peceli and Wendy's Blog at 2:55 PM

It was a nice Anzac day. I like all the beautiful pictures of Turkey. The beach is so amazing and wonderful place for spending lonely time.

For my part one and all have to go through this.