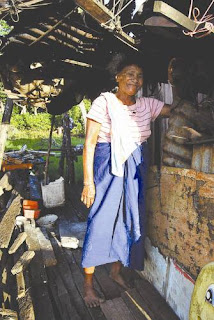 All alone ... Akisi Lobawai outside her home at the edge of mangrove patch in Namara, Labasa.
from w
Some people don't want to live in a community but in Fiji that's quite unusual. However here is a lady who built a shack in a mangrove area to get away from it all.
Lone Squatter
Theresa Ralogaivau
Tuesday, December 22, 2009
ALL alone in the world, Akisi Lobawai, 60, was the first person to start a squatter settlement in Labasa more than three decades ago. And though she calls it the most peaceful place on earth, post-Cyclone Mick Ms Lobawai said she desperately needs a new home. Ms Lobawai lives in a rundown shack, with a leaking roof and cardboard to cover the windows and keep out the wind. The floorboards of the small wooden house creak when she walks about while a small wooden extension outside is hazardous, missing several planks and with a roof that looks dangerously close to flying off.

Ms Lobawai said she moved about 30 years ago to the edge of the mangrove swamp because of sour relations in her village. "Here I am at peace with myself and the world," she said. When the strong winds of Cyclone Mick battered Labasa, Ms Lobawai's house shook so much she thought it would collapse on her. "I need a new home, but I made little from gathering qari (crabs), which I don't do anymore because of my weak knee," she said. "Leave me here, but I just need a new home and any help I can get is welcomed."

Ms Lobawai is from Nasekula Village, which is less than 10 kilometres away from the mangrove patch. But she had no heart for living in the village after her parents and brothers died. "I'm all alone now in the world and sometimes it makes me sad," she said. "But my neighbours of all races are around. I was the first here, and then other people slowly moved here, all had gone through a tough time. Here with me are farmers whose leases have expired who have nowhere else to go. Single mothers who cannot afford to rent in town. There are villagers from Bua who want their children to receive a good education. And here we have managed to live with each in harmony. We don't fight because we all share the same challenges and so there is peace."
Posted by Peceli and Wendy's Blog at 1:16 PM

Thank you for your nice posting.
it is really helpful to us.
such a nice topics.