So what's wrong with the current name?  Babasiga signifies the place - the hot dry land, and 'ashram' is a place of refuge - well, that's what it is for some elderly people in Labasa.  So what do they want to call it> Story from the Fiji Times. Picture from Fiji Sun. 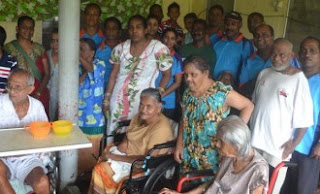 Change of names for homes

Luke Rawalai
Monday, May 09, 2016
THE three state homes in the country will soon undergo a name change says Minister for Women, Children and Poverty Alleviation Rosy Akbar.
Ms Akbar said the move was in the top of the ministry's priority list.
She added this is part of the changes the ministry would soon implement in moving the three homes under the ministry.
"We intend to change the name of the Babasiga Ashram which is not a proper name for such a home," she said.
"Ashram means a refuge or a last resort for people in times of emergencies which should never be because this home should never be a last resort for anybody.
"The elderly people in the homes should never have been there in the first place and they are there because of the love and care that they have denied."
Ms Akbar said as part of the change they were also looking at changing the administration of the homes to give equal treatment and focus to the occupants of the three facilities.
"In the past more attention were given to the children homes while the elderly were forgotten," she said.
"However, we are going to change this and ensure that all homes are given equal attention." 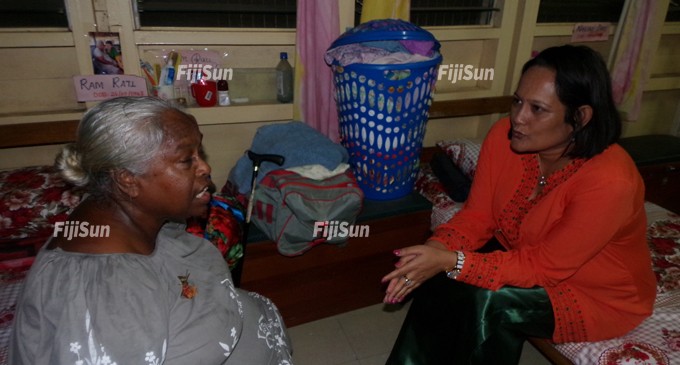 Minister for Women, Children and Poverty Alleviation Rosy Akbar (right), with 68-year-old Ram Rati at the Golden Age Home in Lautoka. Photo: Charles Chambers.
09:122016
Print This ArticleShare it With Friends

by CHARLES CHAMBERS, LAUTOKA 0 Comments
The Ministry Of Women will begin clamping down on the increase of elderly people being left and forgotten in state care homes.
Line Minister Rosy Akbar said: “Please take care of your elderly, especially the mothers who brought you into this world.”
Her plea came during her visit to the Golden Age Home in Natabua, Lautoka on Sunday night as part of her Mother’s Day visits.
Ms Akbar began her Mother’s Day visits with breakfast with mothers at the state care home in Labasa, lunch in Suva with the elderly at the Samabula Old People’s Home, afternoon tea with mothers at  Saint Meena’s Home and dinner at the Golden Age Home in Lautoka.
“The problem of families leaving their parents in care homes has been a long time issue and this will not continue,” Ms Akbar said.
“Of course the Government is here to care but we cannot let families push their elderly out and leave them in state care homes.”
Ms Akbar said her ministry was appealing to the families of the elderly citizens.
“We tried reasoning with them but it’s not working,” she said.
She said her ministry was in the final stages of completing the Standards Operational Manual which would set the way forward towards curbing the increase of elderly being left at care homes.
Edited by Rusiate Mataika

Posted by Peceli and Wendy's Blog at 2:42 PM

I need to help ashram pls email me on prakash_rohit2003@yahoo.ca or add me on whatup group 16048180676 from vancouver Canada