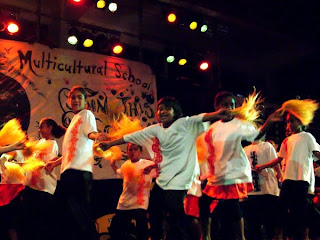 (first post) from w
Good luck to the Primary children who are participating tonight in the Tadra Kahani concert. Last year's winner was the little school in Pacific Harbour, but as their teacher says, all of the dancers/singers/performers are winners. Way to go!
From Fiji Village:
Primary Schools to take center stage tonight
Publish date/time: 18/08/2010 [07:36]
It’s D-day for the 10 schools participating in the Junior Division finals of the FM96 Tadra Kahani with TFL and Fijivillage as they will take center stage tonight to highlight to the nation issues affecting various sectors of our society. The 10 schools will portray themes such as the Gift of Motherhood, Our Culture and Heritage-Our future, Protect Fiji to Protect Me and Throwing Daylight on Tomorrow's Darkness, amongst others.

This year the 10 schools get only one shot to get their message across before the winner is crowned and defending champions in the Junior division, Pacific Harbour Multi cultural school, with their theme "We are all winners" is expected to put up stiff competition for the other schools.

However, liaison teacher Lutua Dominika said they strongly believe that the essence of Tadra kahani clearly reflects their theme.Dominika said the Deuba based school is fortunate to have supportive parents who are talented and helped out in their backdrop and painting and music.

The senior division finals will be held tomorrow night with 14 schools battling it out for top honours.

Tickets are being sold at the home of Fijivillage at 231 Waimanu Road, Village Six Cinemas Suva and Sugar Cane Growers Council Building in Lautoka.
---------
Later; And the winners are:

That was the cheer from the crowd after International Primary School Suva was crowned the new Junior Division Title winner of the FM 96 Tadra Kahani with TFL and Legend FM last night with the theme "Stop Typhoid". One of the students Juliet Evers said she stayed behind while other students had gone home to wait for the announcement. Producer and Liason Teacher, Angela Mahone said she was excited after they were crowned the new Junior Division winner for this year’s Tadra Kahani.

Meanwhile some special awards were also awarded last night. As well as walking away with the Junior Division Title, International Primary School won the award for Best Concept, and Best Soundtrack.

This won't actually have success, I think so.