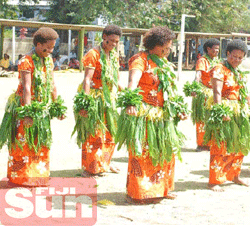 from w
It's good to see the people from Cikobia Island entertaining the people of Labasa with their special skills and interests, including the delicacy of the coconut crab. Fiji Sun tell the story of the program at St Mary's School compound.
Ugavule draws crowd on Cikobia Day
8/28/2010
A number of villagers from Cikobia gathered at Saint Mary's Primary School in Labasa for the Cikobia Development Fundraising day. The day was set aside by village leaders to fundraise for development work on the island. Cikobia is one of the islands that were affected by Cyclone Tomas earlier this year.

A common sight during the fundraising was the preparation of a delicacy Cikobia Island was well known for - the ugavule (coconut crab). The size of an ugavule is usually the size of an unshelled coconut.The crab can pick a coconut from the ground and cut it to a husk the nut, take it with its claw, climb up a tree 10 metres high and dropping the husked nut to break the shell and eat the meat.They cut holes into the coconut with their strong pincers and eat the meat.

Siliva Rato from Cikobia said the ugavule is what Cikobia is well known for and is usually cooked by families during special occasions.“It’s very hard to catch ugavule, but it is very tasty," Ms Rato said. “They usually live in rocks, known to us as cule, this describes the sharp type of rocks that Cikobia has.” She said villages have to wear specially woven shoes in order to catch the crab. “It’s called ‘dabala ni paka’ and are made especially for women to stand on the sharp edges of rocks where the crabs usually hide. We usually catch the crabs at night because this is when they come out from their hiding places to feed. “A factory made shoe will tear after a few minutes, that’s why we have to wear the traditional shoes.” 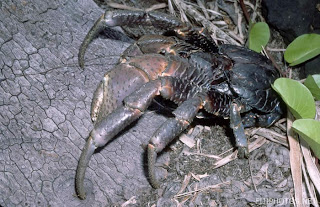 Ms Rato said the ugavule is usually boiled before its meat is served or used with other dishes. “Those who haven’t tasted ugavule will never know what it tastes like. It is beautiful and when it is served with fresh coconut milk, it is even better.”

It was cooked and served to guests during the event while some were sold in various stalls. Live ugavule by yesterday were sold out. It costs $25 for one. The fundraiser will end today.
---------
And also from the Fiji Sun:
Takalautawas donate $15,000 to Cikobia
8/28/2010
The Takalautawa family yesterday opened the Cikobia Development Fundraising day with a $15,000 cheque. The fundraising is aimed to raise funds for the management of the island church and its minister.

The Takalautawas are renowned rugby league player Jarryd Hayne's paternal family. Manoa Takalautawa is Mr Hayne's father and is originally from Cikobia. His uncle Apisai Takalautawa was the chief guest at the event. Grandmother Elenoa Takalautawa said her grandson Jarryd Hayne was unable to attend the event because of games commitments.

“I am very proud of him,” she said.“We know that he is very proud to be from Cikobia.
Even though he is not here, he contributed to the soli, which we came to donate to the people from the island. Ms Takalautawa is originally from Oneata, Lau, and was married to the late Manoa Takalautawa senior. Manoa Takalautawa was a warrant officer for the Fiji Military Forces and they have six sons and two daughters.“It's the people that I hold close to my heart," she said.“Without my support, my children would not have been actively involved in the development activities of the island. So today, our family had come together to contribute and give back to Cikobia because this is where they belong and it's their identity."

Ms Takalautawa is a businesswoman in Suva.

She owns the Tokman's Catering business.

She said funds raised from this event will help to pay the village church reverend's salary. “The church can't fully pay our Talatala's salary, so the family and the island is working together to support the church. We hold the Vanua and the church close to us because Cikobia is a very challenging place to live and we value God dearly. Also, Oneata is the first island in Lau that had received the church when the London Missionary Society visited the island and this is the message we like to carry with us.” Ms Takalautawa told the people of Cikobia that it is through hard work and reverence to God that will make everything possible for them.
Posted by Peceli and Wendy's Blog at 1:37 PM

Hi
nice and interesting story about Ugavule husking and dropping nuts to eat....
My research found otherwise for I have observed the creature crawling to the creature coming up of it's rock dwelling,crawl to the nearest fallen coconut,bring it back to the entrance of it's dwelling and there begins all the husking,process.when half or fully done,it makes a hole thru the one of the 3 facest on the coconut using one of it's very sharp claws.With the claw secured the cracking process begins.Locals know and if hunting at night,this cracking noise guides them straight to their intended target.
Of late the locals have observed a change/decline in the Ugavule population due to unsustainable practises and since 2008 have discussed and implemented habitat restoration for ugavule and other island wildlife.
To this end the Cikobia Development Committee thru it's Environment section have secured some money from Global Environment Facility (GEF) to holistically look at development on Cikobia for the next 12 months and will cover 6 actions and activities
1.Land Use Awareness and community Land Use Training
2.Awareness on Forest Functions and Protection and Re forestation Programme
3.Awareness On Marine Resource Use and Sustainable practices and the development of community management and monitoring mechanism
4.Reviving Traditional Community crafts through Improved Land Use Management
5.Climate Change and Disaster Preparedness Community Capacity Building
6.Community Development Plan.

We have done/finished 4 out of these 6 planned activities and this year's highlight will be the launching of the Cikobia 20 years Management Plan.

Back to the Ugavule story....this Management Plan will ensure that we and the generation that perpetuate will continue to eat this island delicacy for ever and use the spill over to draw even bigger crowd to help us help ourselves.

Thank You for the invite to leave a comment thus an opportunity to tell our story.