From Peceli,
This sounds like a good idea because the income can be used for development as the people here are gone dau and they rely upon selling fish for their income. Most of the Kia people are already living away from the island, such as in Labasa and in Suva. We are closely related to the people as they are kin to Mali Island families. My hope would be to find a suitable development for them, whether it is eco-tourism like Vorovoro or something different. I hope this isn't just words, but that it does happen. The photo is of members of Tribewanted from Vorovoro Island when they visited Kia Island, not far away from Vorovoro. 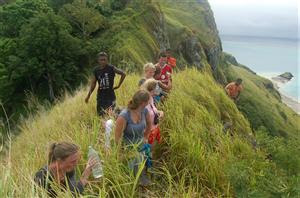 BOOSTING tourism is first on the State's agenda after a landowning unit in Vanua Levu offered its land for commercial purposes in response to the promulgation of the Land Use Decree 2010. The mataqali Burewaqa of Macuata has given government consent to administrate the subdivision and leasing of land on Kia Island.

Land and Mineral Resources permanent secretary Lt-Col Neumi Leweni, in a statement, said the offer could see a tourism market in an exclusive island for overseas retirees, something that has been on the agenda of some tourism investors in Fiji. "We've identified that it is a very good island for hotels and that's specifically what the owners have mentioned to our officers.

"It's quite a big island and would be a good prospect for tourism," he said.

Lt-Col Leweni said his team would document and finalise all the processes before the project gets off the ground.

Land Reform Unit director Laisa Raratabu said they had completed all the "necessaries", which includes the proposal to subdivide land on the island and to seek the endorsement of the Prime Minister's Office.
Posted by Peceli and Wendy's Blog at 8:27 PM

Kia is just fine as it stands with all its natural beauty, and it would be a disaster in the making if we were to introduce money making concepts that will not only change the physical appearance but the way of life of its inhabitants as hotels and the likes of them will restrict access and land use for the people who depend on it for their daily livelihood. Kia is only a small island and whoever thought about introducing such nonsense i think is only looking at dollar signs other then the welfare and preservation of our God given heritage.