Travel insurance and 'an act of God'

from w
Now that thousands of people are stranded at airports and in strange situations, the travel insurers are discussion the repercussions of the Icland volcano ash clouds that have disrupted air traffic all over Europe. They are saying the situation is 'an act of God' which could get them out of paying insurance claims. Do you think volcanoes, earthquakes, tsunamis, cyclones are really God's intention? I rather think that the geology, weather, geography, as well as some choices of people to live in vulnerable places is factored in rather than 'an act of God'. Yet many people maintain that God is teaching us something in these tremendous upheavals of nature. Yes, we can learn from them, but I think they have 'natural' causes, in that our earth is not always stable and predictable.
What do you think?

from today's Age newspaper
Travel claims hazy as insurers declare eruption act of God
RACHEL OLDING AND BEN DOHERTY
April 20, 2010
ABOUT 20,000 Australians, whose travel plans have been thrown into chaos by the Iceland volcanic eruption, face confusion over their travel insurance.

The director of the multi-insurer travel insurance website Travel Insurance Australia, Walter De Angeli, said the big insurance providers such as QBE and Alliance were offering to cover all reasonable expenses such as accommodation, meals and cancellation fees incurred after European flights bans last week. But some companies were deeming the event an ''unforseen act of God'' and refusing to cover some expenses. ''There's a nebulous dividing line and no one knows where it is marked,'' he said. ''For this [event], had they wanted to, the insurance companies could have pulled the ''act of God'' defence out of their bag of tricks but most have said they won't.''

A spokeswoman for the Insurance Council of Australia said insurance providers could use their discretion when determining claims from disasters such as the volcano and that ''no two policies are the same''.

The managing director of 1cover travel insurance, Eddie Feltham, said any claims on policies issued by 1cover before April 16 when the volcano erupted would be fully covered. Covermore said customers had to ''take all reasonable steps'' to minimise their claim.

Travel Insurance Direct promised to cover all expenses and the company's general manager, Ian Jackson, said there should be no distinction with regards to flights delayed ''due to these sort of natural disasters''.

The Travelscene American Express general manager, Jacqui Timmins, said many travellers had not fully acquainted themselves with their insurance policy and were now finding themselves without sufficient cover.

Qantas is urging Australian passengers stranded in Asian transit hubs of Singapore, Bangkok and Hong Kong to accept the airline's offer of a free flight back to Australia, so they can restart their journey once European airspaces reopen.

About 800 Australians remain stuck mid-journey in Asia, most in Singapore. Initially, more than 1000 people were stuck in Singapore, but about half have returned home. Most of the 350 Australians in Bangkok and Hong Kong have flown back to Australia.

But Europeans stuck in Asian airports are being told it could be two weeks before they are able to fly home. At Suvarnabhumi Airport in Bangkok yesterday, thousands of stranded passengers were trying to rebook on the first available flight to Europe.
Granville and Angela Harris from Birmingham were told yesterday the first Thai Airways flight to Britain they could take was on May 4. 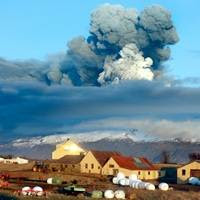 from Yorkshire Post:
.....All this is as a result of a relatively small eruption compared to the powerful Mount St Helens event in Washington State in1980 or the Mount Pinatubo eruption in the Phillipines in 1991. The difference here is an unlucky and unpredictable set of circumstances that means our science and technology-driven world is held to ransom by Mother Nature.

The eruption is causing such spectacular problems because it is taking place beneath an ice cap. This means the molten magma hits ice and water, causing it to cool very quickly – a process which means it is pounded into tiny fragments. The ash is then blown up into the sky by steam fountains created by evaporating ice. Larger lumps of ash fall in the local area, and the clouds of finer ash are lifted high into the sky and carried away by air currents. This "ash" is actually made up of tiny glass particles that cause a threat to aircraft.....
Posted by Peceli and Wendy's Blog at 9:26 PM

OSLO (Reuters) - A thaw of Iceland's ice caps in coming decades caused by climate change may trigger more volcanic eruptions by removing a vast weight and freeing magma from deep below ground, scientists said on Friday.

They said there was no sign that the current eruption from below the Eyjafjallajokull glacier that has paralysed flights over northern Europe was linked to global warming. The glacier is too small and light to affect local geology.

"Our work suggests that eventually there will be either somewhat larger eruptions or more frequent eruptions in Iceland in coming decades," said Freysteinn Sigmundsson, a vulcanologist at the University of Iceland.

"Global warming melts ice and this can influence magmatic systems," he told Reuters. The end of the Ice Age 10,000 years ago coincided with a surge in volcanic activity in Iceland, apparently because huge ice caps thinned and the land rose.

"We believe the reduction of ice has not been important in triggering this latest eruption," he said of Eyjafjallajokull. "The eruption is happening under a relatively small ice cap."

Carolina Pagli, a geophysicist at the University of Leeds in England, said there were risks that climate change could also trigger volcanic eruptions or earthquakes in places such as Mount Erebus in Antarctica, the Aleutian islands of Alaska or Patagonia in South America.

"The effects would be biggest with ice-capped volcanoes," she said. "If you remove a load that is big enough you will also have an effect at depths on magma production."

She and Sigmundsson wrote a 2008 paper in the scientific journal Geophysical Research Letters about possible links between global warming and Icelandic volcanoes.

That report said that about 10 percent of Iceland's biggest ice cap, Vatnajokull, has melted since 1890 and the land nearby was rising about 25 millimetres (0.98 inch) a year, bringing shifts in geological stresses.
.................
www.scientificamerican.com/article.cfm
Anonymous

Of course, since we don't believe in God anymore, all of those insurance contracts could just be voided by the courts, right?

Hildebrand,
Yes, I was thinking of that movie about suing God.
The term 'act of God' isn't fair on God anyway in whatever terms he/she is conceived to be!
However there would be many many people who do see geological/weather etc. events as given by God to teach/punish humanity, but I don't see it that way.
W.

Travel insurance is insurance that is intended to cover medical expenses, financial, and other losses incurred while traveling.

Travel is so much fun but you can’t tell if there is nothing bad going to happen to you or to your family. Having travel insurance is a must. It is better to be ready than sorry.

Thanks for the effort you took to expand upon this post so thoroughly.

When it comes to adventure vacation deals, there actually are a number of different choices available to you. Find out more! Africa travel

This is a wonderful opinion. The things mentioned are unanimous and needs to be appreciated by everyone.
-----------
software companies

Interesting blog. It would be great if you can provide more details about it. Thanks you.

This is very greatful and informatic helpful Can I quote a post in your blog with the link to you? i want to book mark it !
Bandhavgarh Wildlife Tour

Interesting post. "Acts of God" are the very reason travel insurance- and in this economy, income protection plans are absolutely essential. Guardian is an especially good provider of both.

My daughter got stuck in Italy with a school trip. Thankfull her teachers acted very quickly to make overland travel arrangements. They were only two days late so we were very lucky.

I believe airlines can deduct more of those losses on taxes than the insurance companies can. Anyway, I really hate the old "act of God" excuse they give. It is so loosely outlined that insurance companies strive to fit every case into those parameters... the less they pay out, the more they make.

There are many benefits we can get from travel insurance. We can use it when faced to natural disasters such as erupting volcanoes, earthquakes, tsunamis, cyclones.

These kind of post are always inspiring and I prefer to read quality content so I happy to find many good point here in the post, writing is simply great, thank you for the post.

Nice sharing the conversations too. It gives an idea about the thoughts of Travel. Thanks. Keep posting.

travel insurance plan is devised in a way to offer you complete security while studying abroad. You must get all that you have been looking for online. Compare quotes and read a lot of reviews prior to taking a decision

Hey, awesome site! Keep it up! I will be difinatley be coming back in the near future =)

I am glad to find your impressive way of writing the post.Thanks for sharing the post.i'm sharing your information to all friends.If you
Want more details kindly Visit Cash on Credit card

There are many benefits we can get from travel insurance. We can use it when faced to natural disasters such as erupting volcanoes, earthquakes, tsunamis, cyclones.