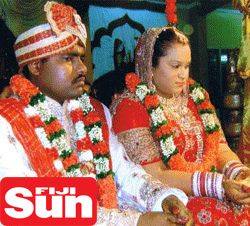 from w
A young couple went back to Labasa for their wedding ceremony. Good luck to them both.from Fiji Sun
Couple return home for wedding
4/10/2010
Molleen Preeti Verma and Kamlesh Chand returned home to Labasa this week to get married. They reside in different countries; Miss Verma in Australia and Mr Chand in New Zealand. They returned to their birthplace, Labasa, this week to get married. The couple was married in a traditional ceremony after they first met through ‘arranged marriage’ between their parents.

Molleen, now Mrs Chand, works at the Commonwealth Bank in Melbourne, Australia, while her husband is an automotive mechanic in New Zealand.

Originally of Nabekavu, Waiqele, Labasa, Mr Chand always dreamt of returning home to Labasa to marry his true love. His dream came true this week. The couple were both born and raised in Labasa before moving abroad with their families. Their wedding was at the Kshatriya Hall at Labasa Town, where they exchanged vows in front of 600 people.

“We are both happy and overwhelmed by the support of our friends and family members who attended our wedding,” said Mrs Chand.

The 24-year-old said she always looked upon her mother, Mrs Lata, for advice and support.

Mrs Lata said she advised her daughter to look for the best man to become her husband. “It was a perfect wedding and it was a joyous and memorable occasion,” she added.“We are from Labasa and it was only right that they get married at home in front of our families and friends,” she said. The couple was engaged in Melbourne and visited each other occasionally where their love developed.

“We both wanted to have a traditional wedding ceremony and now that it is over, we are very proud of our inheritance,” said Mr Chand.

The bride’s mother, Mrs Lata, said as a parent, it was a proud moment for her to see her daughter happy. She said the wedding was the best send-off for her daughter. “We are happy to see our children get married before their families. It was a wedding to remember and we are proud that they have opted to seal their vows traditionally,” she said.

The couple leaves for Australia tomorrow.
Posted by Peceli and Wendy's Blog at 3:15 PM