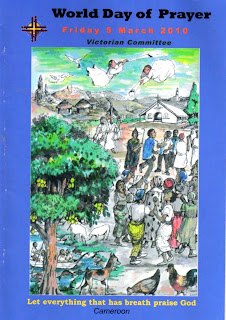 from w
Every year on the first Friday of March the World Day of Prayer is celebrated - starting from Tonga and Fiji and going right around the world as people gather in churches in about 127 countries. This year the service was created by the people of Cameroon. I went to Wesley Church in Geelong this morning and Rev Sani who is from Samoa was the speaker. It was lovely to join in prayer thinking of others all over the world who are following the same Order of Worship. I remember the times in places like Rakiraki, Labasa, Lautoka, Suva, Labasa, where I have joined in such a service. I read in Fiji Radio's internet link today that Dudley Church in Suva had their service this morning. We had the usual hymns in English and I was a bit disappointed that we didn't have any taped music from Cameroons as African music is so stirring. Every year there is one special song which includes the following words:
Across each continent and island
as dawn leads on another day,
the voice of prayer is never silent
nor dies the strain of praise away.

The World Day of Prayer, with the theme Let Everything That Breathes Praise the LORD, was launched at dawn this morning at the Dudley Church, with the President Ratu Epeli Nalatikau in attendance. Methodist Church Reverend James Bhagwan says the President acknowledged the important role played by the women of Fiji.

“Speaking to the women and men gathered at the church this morning the President said that this mornings program World Day of Prayer provides a good opportunity for us as a nation to reflect on the importance of women, our mothers, auntys and sisters to recognize and acknowledge their contribution to the nation building and national development in our quest to build a better Fiji. He spoke for a few moments about the situation in Fiji in terms of crime and some of the work that government is doing and enjoying the service.”

Bhagwan says our prayers were the first to be offered in the world.

“The service which began with the women of Dudley church processing into the church in dance to the calypso beat with the Chorus Let Everything that Breathes praise the LORD was actually possibly the first world prayer service to be held this year due to our current daylight saving program. And of course in terms of the International dateline.”

And also, - from Fiji Times Saturday Prayers for Cameroon
Monika Singh
Saturday, March 06, 2010
METHODIST Church women from all around Fiji bowed their heads in prayer yesterday for the women in the African nation of Cameroon. Women from the Nabua Methodist Church circuit celebrated World Day of Prayer at the church and the women dressed up in traditional attire of the women from Cameroon and marched to the church with the Cameroon flag.

"Before we became aware of this World Day of Prayer we used to think that no other women in the world faced problems that we do," she said.

"Problems like domestic violence, rape and trying to keep a family intact."

Ms Kamakorewa said the women at the church chose to dress up as Cameroonian women because they wanted to show that they supported the women's fight for freedom. "This is our way of saying that we hope and pray that those women overcome their problems," she said.

Ms Kamakorewa said after the prayer vigil the women had a collection which would be sent to the women in Cameroon.

World Day of Prayer is a worldwide movement of Christian women of many traditions who come together to observe a common day of prayer each year, and who, in many countries, have a continuing relationship in prayer and service.African fever ... women of the Nabua Methodist Church circuit pay tribute to their counterparts from Cameroon. 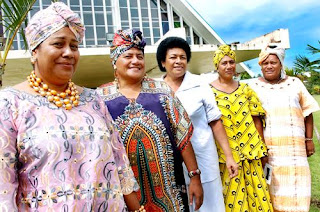 Posted by Peceli and Wendy's Blog at 6:35 PM