from w
I phoned the family in Labasa and got through immediately to hear the lovely Fijian hymn the girl uses on her mobile. She told me the wind is already getting strong in Labasa but there isn't heavy rain. They have been told to expect the cyclone/hurricane tomorrow (Monday) so school and work will be out as the families batten down the houses to be secure. It sounds like Cyclone Tomas will be a big one, similar to Hurricane Bebe of 1972 as it moves slowly but surely towards Vanua Levu. I remember Hurricane Bebe because new babies in the family got the nicknames Bibe and Bebe that year. 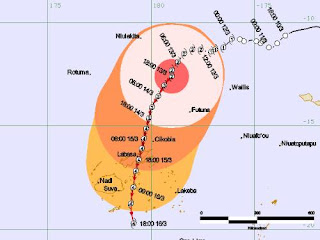 Similar reports have been received from Taveuni.

There have been no reports of damage.

Tomas remains on a southwesterly track at about 10km per hour and is expected to make landfall over Labasa tomorrow night.

Wind and rain generated by the cyclone is expected to affect all parts of Fiji. Southeast winds are expected to intensify during the day today reaching speeds of 75km per hour over the Koro Sea by 6pm.

Acting Director DISMAC, Pajiliai Dobui has this afternoon confirmed that all evacuation centers in the North, in the Eastern and Central Division have been activated.

Dobui added that no help will be given to those that ask for help when the eye of the storm is over Fiji.

Please take the necessary steps now.
-----------
Official weather warning Sunday afternoon:
This is Special Weather Bulletin Number ELEVEN for Fiji ON TROPICAL CYCLONE TOMAS ISSUED FROM RSMC NADI at 4:17pm on Sunday the 14th of March 2010
A TROPICAL CYCLONE WARNING IS IN FORCE FOR THE WHOLE FIJI GROUP.

SEVERE TROPICAL CYCLONE TOMAS CENTRE 970HPA CATEGORY 3 WAS LOCATED NEAR 13 DECIMAL 9 SOUTH 179 DECIMAL 3 WEST OR ABOUT 260KM NORTH-NORTHEAST OF UDU POINT AT 4PM TODAY. CLOSE TO ITS CENTRE THE CYCLONE IS ESTIMATED TO HAVE AVERAGE WINDS OF 120 KM/HR INCREASING TO 160 KM/HR WITH MOMENTARY GUSTS UP TO 220 KM/HR IN THE NEXT 18 TO 24 HOURS. THE CYCLONE IS INTENSIFYING AND MOVING SOUTH-SOUTHWEST AT 15 KM/HR.

DAMAGING GALE FORCE WINDS EXTEND TO ABOUT 280 KM FROM THE CYCLONE CENTRE.

FOR VANUA LEVU, TAVEUNI AND NEARBY ISLANDS AND NORTHERN LAU GROUP:

FOR THE REST OF FIJI :

do you know which year that a particular hurricane or cyclone that hit Kadavu Island and the rest of Fiji, in which people perished in a church...on the island of Kadavu.

By the information on Hurricane Tomas was informative

Bula sia,
I don't know but you could do a google search with words such as 'cyclone' or 'hurricane' and 'Kadavu'.
W.